The Tomb of the Unknown Soldier

At 6:30 PM every evening, a torch is rekindled. Veterans lay wreaths decorated with the red, white and blue colors of the French flag near its flickering flame. A daily ritual since it was first lit in 1923,  the torch burns eternally in memory of  an unknown French soldier who gave his life during the First World War.

Under the Arc de Triomphe stands this torch. The unknown soldier buried here represents all the unidentified soldiers who made the ultimate sacrifice for their country. 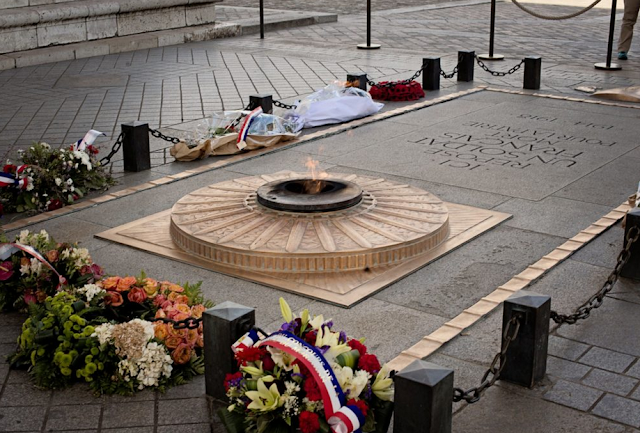 An inscription on the tomb  reads “ Ici Repose un Soldat Français Mort pour La Patrie 1914-1918” (Here lies a French soldier who died for his fatherland 1914-1918).
It is heartbreaking to think of the countless bodies of fallen soldiers who were never identified : husbands, sons or fathers who never came home after the war.

The unknown soldier gave his life to a war not of his making nor his liking to protect the freedom of people who will never know his name.

"...But these are only boys, and I will never know
How men can see the wisdom in a war.."