I was told that once you have tasted the fries in Belgium, you will never have them as good anywhere else in the world!

Thickly cut and fried twice in beef tallow, Belgian fries are super crispy on the outside and soft and fluffy on the inside. They are typically sold in a paper cone, and with a plastic fork. The locals love their fries smothered with thick dollops of mayonnaise. Some vendors (friekot) offer up to 40 different kinds of sauces : Andalouse (mayo, tomato, and peppers), Samurai (harissa mayo),  curry sauce, bicky ketchup, Bearnaise ...

No one calls them French fries in Belgium and apparently, there is a longstanding culinary war over the rightful ownership of the fries. I was told that Belgians remain sensitive about their fries being referred to as French.

They may be known across the world as ‘French fries’, but there’s nothing French about them. The name ‘friet’ comes from patates frites, Belgian-French for ‘fried potatoes’. One possible explanation for the association could be that when American soldiers were introduced to ‘fried potatoes’ in Belgium during WWI, they thought they were in France because French was the language spoken in that region.

The Belgians blame the American soldiers  for having dubbed their national dish with the misnomer!


We had ours topped with pulled pork and chopped onions in a curry sauce. It was truly amazing! 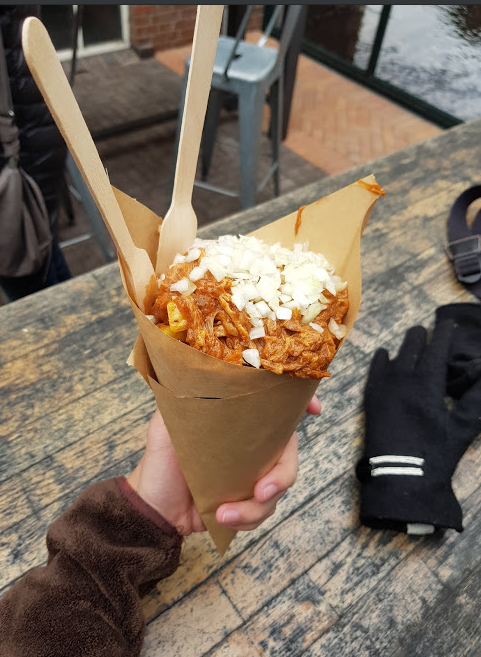 And once you've tasted Belgian frites, there is no going back!