Sometime back, Rodney's university mate from Korea gave him a tub of Gochujang paste knowing my son's love for Korean food. I had completely forgotten about its existence until I cleared my kitchen cabinets yesterday! As the unopened tub is good until 31st December 2017, I thought to attempt at least one recipe using this red chili paste before it ends up in the trash can. 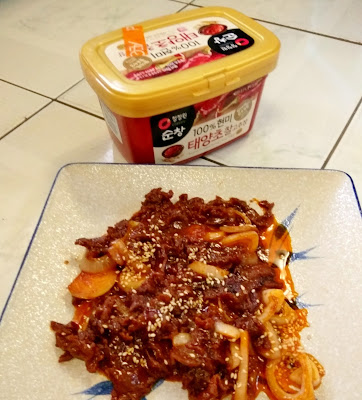 I did a Korean pork stir fry and it turned out pretty good.

1. Cut pork into thin slices.
2. Marinate pork with gochujang, sesame oil and sugar for about an hour, preferably overnight.
3. Heat oil in a  non-stick pan over high heat. Add onion, cook for 2 minutes until translucent. Add pork and cook for 5 minutes or until  caramelised, and just cooked through.
Serve with rice. 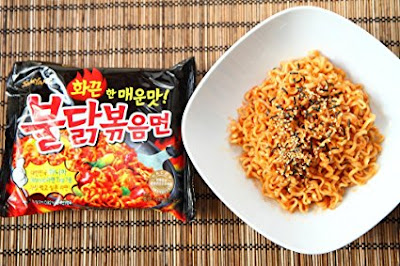 Speaking of Korean food, have you tried the fire noodle challenge that blazed Youtube with videos of people  challenging one another to eat 'Booldalkbokkeummyun' or 'Fire Noodles' as quickly as possible?
Interestingly, Booldalkbokkeummyun is Korea’s spiciest instant noodle. This evil looking red noodle clocks in at around 8,000 on the Scoville scale and is reputed to be the spiciest instant noodle on the market. Nasty!
As a Malaysian who's worth her salt, I can do spicy but my pungency level registers only between 1,000-3,500 units on the Scoville scale. I couldn't possibly brave the challenge but curiosity got the better of me. I had to know what the noodle tasted like. Just like the proverbial cat, curiosity did almost kill me or rather, my tastebuds.  Regretting after only the first bite, my tongue, lips and throat were on fire and I was crying  MURDER! My tongue would never be the same! The noodles have zero flavour, just insanely HOT, HOT, HOT!  I most certainly would not eat them again, EVER!
Hubby and the boys fared better but by the time they wolfed down the entire bowl, they were sweating big time, their noses watering and eyes tearing up like cry babies! Yayyy! Now their talented tongues can chalk up the spiciness meter to the next level on the Scoville chart!  Congratulations, boys!

I still have 4 packets of Booldalkbokkeummyun left that came in a pack of 5. Nobody wants to eat them. Any takers? Not for the faint-hearted, I caution you! The effects are long lasting. Your butt is going to be on fire the next day when you go!

I haven't been baking or blogging for quite a bit now so here's a post just to crank up my blog again.
What's better than a Wordless Wednesday post when you are blocked for something to write about?