Why The Cat Is Not In the Chinese Zodiac Calendar

2018  is the Year of the Dog. According to Chinese zodiac, an animal is assigned to your birth year and impacts on your personality traits and fortune. The dog is one of the 12 animals associated with each year in a repeating 12-year cycle. In order, the 12 animals are: Rat, Ox, Tiger, Rabbit, Dragon, Snake, Horse, Goat, Monkey, Rooster, Dog, Pig.

What? No Cat? Don't Chinese people love cats, you wonder. Yes we do! So why isn't Cat in the cycle?

There are many versions of the folktale behind the missing cat in the Chinese zodiac.
Here's the one I grew up on.

The Jade Emperor wanted to devise a way to measure time so he decreed a race between all the animals in his kingdom. The first 12 animals to make it across a river would earn a spot on the zodiac calendar in the order they arrived.
Rat knew he was no match against the other bigger and stronger animals so he hopped onto Ox’s back. Cat, who disliked getting wet, also hitched a ride on Ox. When the three were almost ashore, Rat pushed Cat off  Ox's back, jumped ahead and was the first to arrive. Ox lumbered right behind and came in second. Tiger was third. Leaping from boulder to boulder to keep dry was Rabbit  but halfway across the river he slipped and tumbled into the water. Rabbit grabbed onto a floating log nearby that would later take him to shore. He was the fourth animal to arrive. In fifth place was the flying Dragon. The Jade Emperor wondered why a swift airborne creature such as Dragon should fail to reach first place. Dragon explained that he was held back as he had to stop and make rain for a village suffering from a drought. Then, on his way to the finishing line, he saw Rabbit clinging onto a log, drifting helplessly so he again, stopped to let out a huff of wind to push Rabbit to shore. Horse galloped up next but unbeknownst to him, a snake that had coiled around his leg slithered out in front. Horse reared back in fright, giving Snake the sixth spot, while  Horse placed seventh.
Coming right behind were the Goat,  Monkey and Rooster. The trio had been working together as a team to paddle a raft across the river. When they pulled the raft to shore, they marched to the feet of the Emperor in the same order they had been seated, thus coming in eighth, ninth and tenth place. Finishing eleventh was Dog followed by Pig.

Cat eventually drowned and therefore, never  made it in the zodiac

Watch this super cute video that tells the story.


HAPPY YEAR OF THE DOG, PALLIES!

So what is your Chinese zodiac animal? I am a Tiger. Roarrrrrrrrr!
Posted by Veronica Lee at 7:39:00 PM 27 comments:

You are at the mall, browsing through clothes on a rack and someone behind you taps you on the shoulder. You turn around and see this big guy in a red dress with an enormous head. Don't freak out!  You've just been blessed by The God of Prosperity and wealth will be upon you soon!

"Hogwash!", you say. Well, that was what I thought too. Then you go home, check your e-mail and scrolling down your inbox, you see the words, "Congrats. You've won..." on not one, but two subject lines. You win one $250 Paypal cash giveaway and another $100 Amazon Gift Card giveaway all on the same day, right after you've been touched by The God of Prosperity?! Fluke or what?
According to Chinese mythology, Caishen aka God of Prosperity is a powerful deity, usually depicted  in red clothes, riding a black tiger and holding a Ruyi (a scepter with the power to turn rock, some say iron, into gold). He also has magic pearls that would explode as grenades. He's one cool dude! Caishen is also heaven's accountant and he guards all the treasures above. More than that, he has the power to bestow fortune and wealth to humans on earth. Zeus has nothing on Caishen!

Once a mortal, Caishen was the uncle and  minister to Emperor Zhou of the Shang Dynasty. An honest and successful merchant, Caishen was loved and revered by many as he was benevolent to fellow merchants and the needy. He would fund the failing businesses of his merchant pallies with no obligations  and share his riches with those in need.

Soon his increasing popularity invoked the jealousy of Emperor Zhou and his family.
Daji, Emperor Zhou’s most favored concubine killed Caishen by digging out his heart. But legend has it that he did not die. He was given a magical panacea by a hermit that saved his life. Caishen fled to the woods with his wife, children and fortune. He would continually emerge from the woods to distribute his wealth to the peasants. The magical panacea gave him immortality and he ultimately ascended to heaven as The God of Prosperity.

While Caishen is worshipped in temples and homes all-year round, the deity is a popular icon during the Chinese New Year season. You would see mascots like the one above in many malls in Malaysia. Think Santa Claus! Instead of gifts, The God of Prosperity hands out candies, faux gold ingots and ang-pows (red packets with money inside) as symbols of wealth and good luck.

My cookified God of Prosperity
2018 is the Year of The Dog, pallies!

Look what we found when The Hubs and I were having breakfast at a new yum cha joint in our neck of the woods! 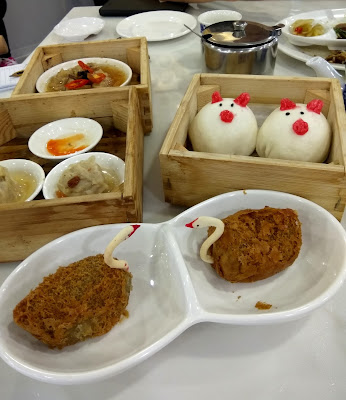 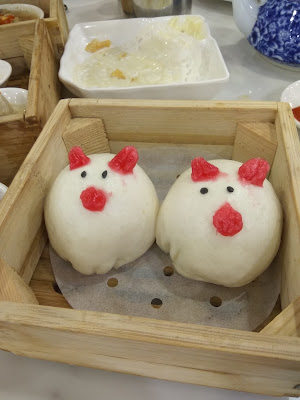 I've seen dumplings and baos in the shapes of Minions, pandas, Disney characters, etc. on Instagram but these swans are my first. 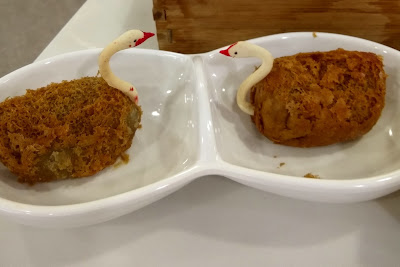 I don't usually photograph my food before I devour them but these are just too cute to pass!

Guess who was waiting impatiently and rolling his eyes while I took the pictures!

Do you get annoyed when a meal is served and your Instagram-obsessed friends yell for you to stop just as you are about to dig into your favorite food so they can shoot every dish on the table?