My son, Josh, plays the violin in his university's orchestra and a community orchestra. 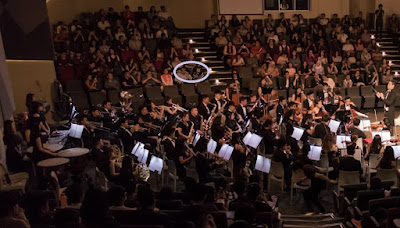 Me and the hubs at one of Josh's concerts

A recent concert by the community orchestra

Whenever my nephew visits from neighbouring Singapore, he always requests for a Ramly Burger. A classic Malaysian street food, the Ramly Burger is a huge favourite with the locals and Singaporeans.
Essentially, the Ramly Burger is just an egg-wrapped burger but the way the burger guy makes it is kinda fascinating.
First, the meat patty is butterflied, squirted with sauces and then joined back up. Next, an egg is cracked onto the griddle and spread out evenly and thinly. The patty is then drenched with more sauces and folded with the egg like a parcel! An ingenious way of containing the sauces, don't you think? Before the burger is wrapped up, the 'parcel' is then placed on a buttered bun, topped with shredded cabbage and slivers of onions followed by more liberal squirts of mayo, Maggi Seasoning and chili sauce. Sloppy, greasy, unhealthy and overloaded with sauces but totally worth it!

Here's how it's done.


Interestingly, did you know that Ramly Burgers are banned in Singapore due to concerns over the low quality meat? This makes the forbidden burgers even more desirable and enterprising Singaporean street vendors have even resorted to selling burgers with their own patties in the clever disguise of Ramly's trademark burger wrappers!
Nice! But it's the Ramly patties that are the heart and soul of this unique Malaysian burger. I was told that vendors risk jail and fine and even their trade license just to smuggle the frozen patties into their country!

So why is it called the Ramly Burger?

Founder Ramly Bin Mokni created the burger  in 1979. The couple initially sold burgers at a mobile kiosk in Kuala Lumpur. When their burgers gained popularity,  they subsequently sold their unique patties, along with the egg-wrapping technique to other street vendors. The vendors named the burger after their supplier.
Five years later, the couple opened their first factory when their homegrown business expanded. 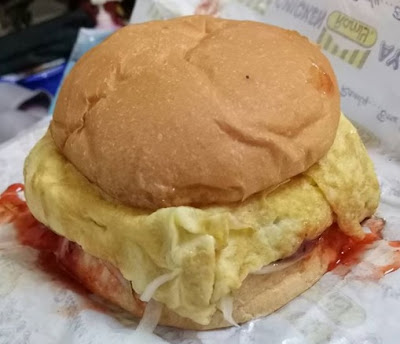 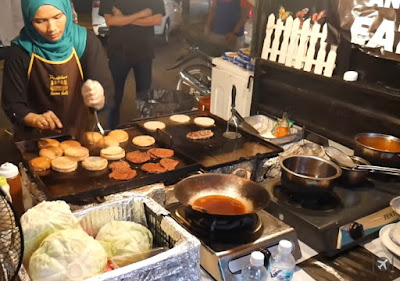 Operating only at night and usually run by young people with daytime jobs,  Ramly Burger stands can be found everywhere and in every neighbourhood. You can be certain there is always one in front of  a 7-Eleven store. 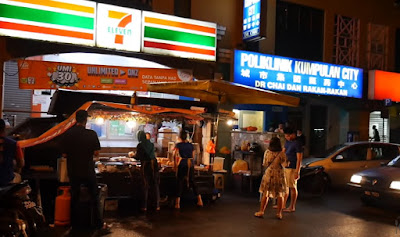 While waiting out the rain in a restaurant, my son Rodney messed around with an Instagram App to kill time. It was raining cats and dogs. Stuck in the restaurant with nothing else to do, I stared out the window, watching and listening to the pitter-patter of the falling rain; something I hadn't done in a long, long time. One tends to take the rain for granted when one lives in a country with a wet climate.

The sound of the rain was a balm for my soul. I felt a sense of peace and calm.

What can be more perfect than a nice glass of steaming Oolong tea on a cold rainy day?

I really love Rodney's cinemagraph.  It's a reminder to take a break from the fast track; to slow down and  enjoy the simple pleasures around us. Sometimes, we need to stop and smell the rain.

The sound of rain reminds me of Grandma frying keropok (prawn crackers). The Hubs says he associates the sound of rain with mah jong tiles shuffling. To Rodney, it's bacon sizzling. Josh says rain sounds like someone typing on a keyboard.

What does the sound of rain remind you of?