Bridges fascinate me, especially the old ones built from centuries ago.There is something magical about these structures that are designed to connect people and places that would otherwise have to exist separately.

I can still recall the first time I caught a glimpse of London's Tower Bridge ahead on the horizon. Having seen this bridge in so many pictures and movies, and always hoping to see it myself one day, it felt surreal crossing it. Every sense in me heightened. I tried to take it all in as fast and as much as I could.Then the brief encounter was over and everything was but a memory. I wanted to turn around and cross it all over again!

That same feeling was awaken when I spotted an ornate fairy-tale-like bridge across the River Seine. I didn't realize it at first but we were actually crossing the most beautiful bridge in Paris and some say, the world! It only hit me then that the bridge was Pont Alexandre III when I recognized the elegant candelabras that graced the balustrades from Adele's video Someone Like You.

The ornate bridge was breathtakingly beautiful and with the gold glistening against the drab, gray Paris sky, it was a sight to behold.

Pont is French for bridge. The bridge is named after Alexandre III, the Russian Tsar responsible for signing the Franco-Russian Alliance in 1892. 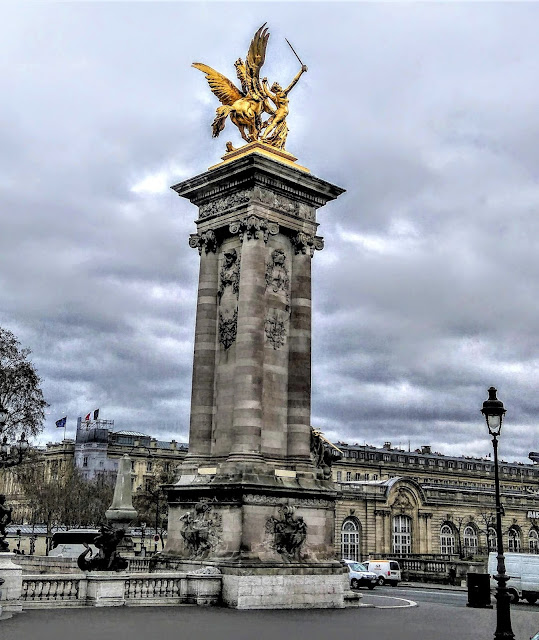 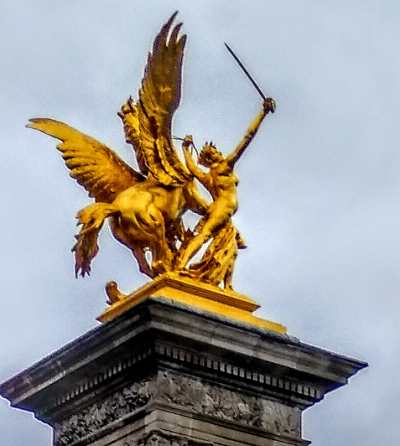 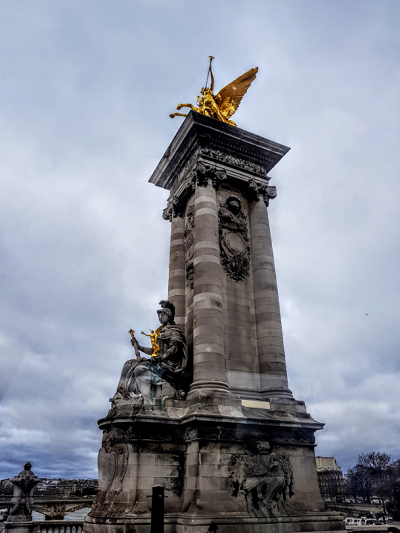 The 4 columns are each adorned with a statue allegorical of a specific and important period of French history: King Louis XIV, Charlemagne, Contemporary France and Renaissance France. 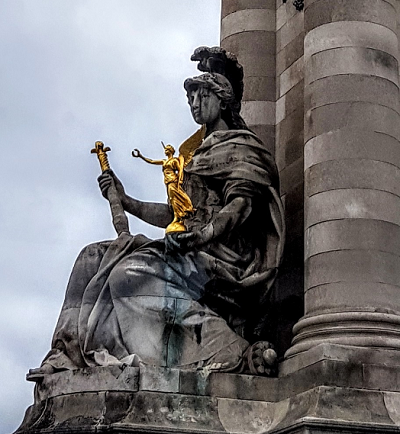 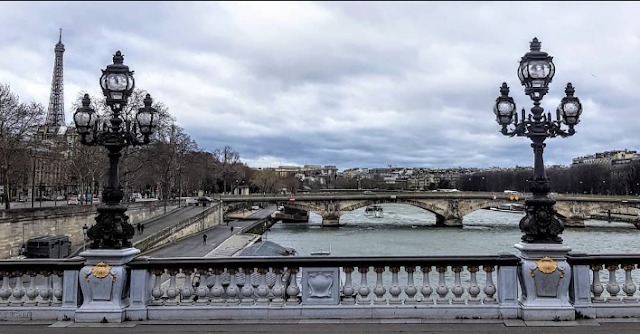 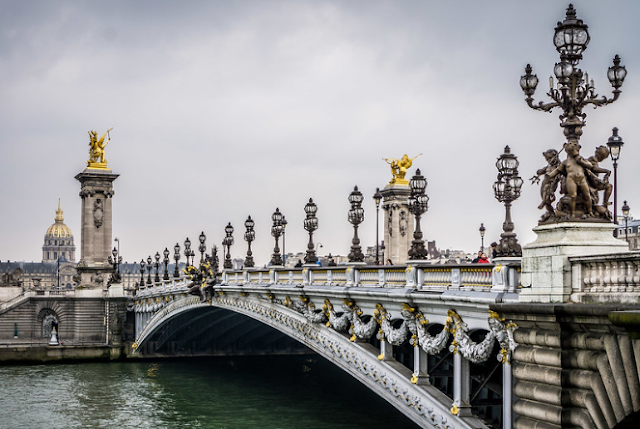 Crossing the bridge in a bus, we missed out many elaborate sculptures on the bridge : lions, cherubs, nymphs, maidens, cupids, water spirits, fish, scalloped seashells, sea monsters.... Plus, taking photographs in a moving vehicle proved to be quite a challenge! Just as I was about to click the camera, the bus would have passed the intended subject already! 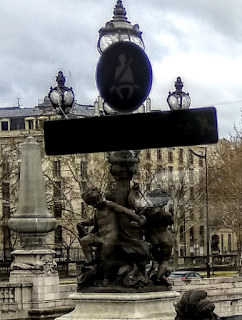 I was having a tough time using the above image to find related images on the web so I could identify the sculpture when my son Rodney pointed out to me that  the black thingy wasn't part of the sculpture –  it was a sticker on the window of our coach!!!

Sharing instead the following HD images, courtesy of EUtouring.com.
This sculpture (the one with the window sticker!) embellishes a candelabra on the bridge. There are 4 candelabras that are surrounded by statues of cupids with aquatic creatures at their feet. Although they share the same theme, the cupids and aquatic creatures/sea monsters are not identical.
The bridge is flanked by two nymph reliefs centered on both sides of the bridge facing the water  –  nymphs from the River Seine (France) on one side and nymphs from the River Neva (Russia) on the opposite side. 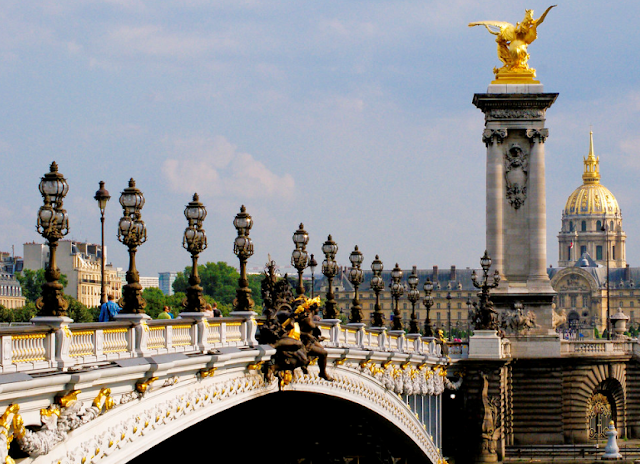 Sculptures On The Bridge 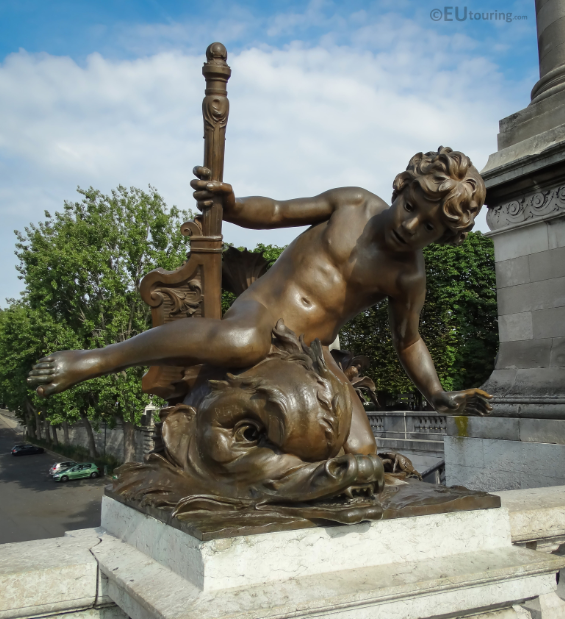 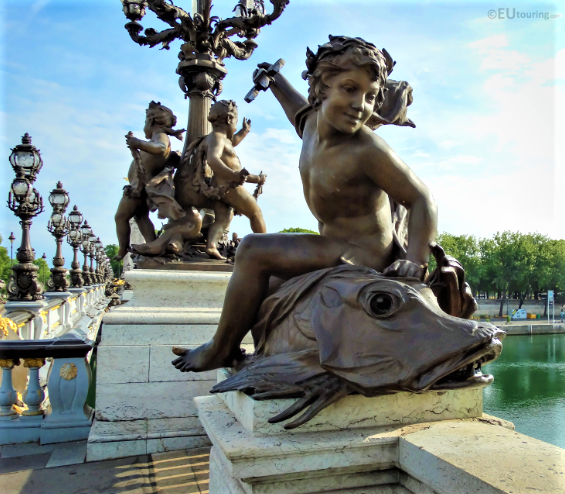 Fillette a la Coquille (Girl with a shell)
8 years and this video still gives me goosebumps! Now, even more!


What is the most beautiful bridge you have seen?
Posted by Veronica Lee at 3:59:00 AM