One Night In Dubai 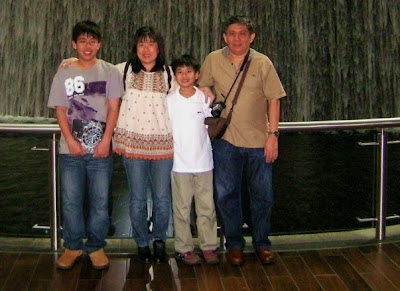 As soon as we stepped out of the Dubai Airport, we were overcome by the intense desert heat. Coming from a country like Malaysia, I thought the Dubai climate would be the last thing we would sweat over but the oppressive heat, coupled with the high humidity was unbearable. The abrupt change in extreme temperatures from frigid London to the torrid emirate made it even worse.
I had wanted to check out the souks (traditional Arabic market places) in Old Dubai and the boys had planned to sandboard or perhaps ride a camel in the desert but the brutal heat thwarted our plans and we weren't risking a heatstroke. It seemed like the only 'cool' things to do were checking out the Dubai Mall (World's Largest Mall) and cruising down a creek in a dhow (wooden sailing vessel) after sundown. I was told that temps hovered around the 50s (100s in Fahrenheit) in the summer! 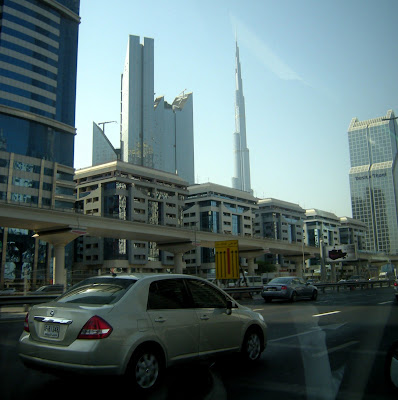 Pic taken in our taxi enroute to our hotel.
Can you see the world's tallest building, the Burj Khalifa? 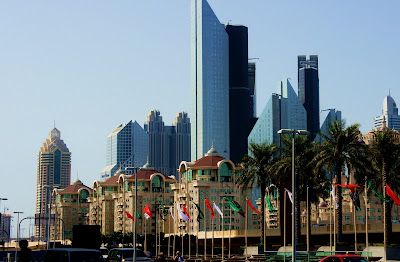 Isn't it amazing how a city can arise from a desert? 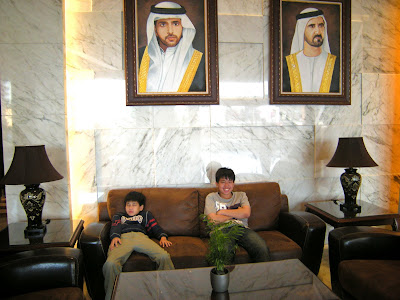 The portraits of the two sheikhs on the wall are emirs of the United Arab Emirates (UAE). An emir is a title of high office (a prince/commander/general) used throughout the Muslim World. The face on the right seemed to be plastered on posters and billboards throughout Dubai. He is Mohammed Bin Rashid Al Maktoum, the Prime Minister and Vice President of the UAE, and absolute monarch of Dubai. The one of the left is the crowned prince of Dubai.

A question to test your general knowledge.

Q. Is Dubai a state or a country?

A. Neither. Dubai is one of the seven emirates in the country United Arab Emirates.

An emirate is a political territory that is ruled by a dynastic Muslim monarch styled emir.

I didn't know either! I thought the UAE and Saudi Arabia were one and the same!!! I sucked at geography anyway! 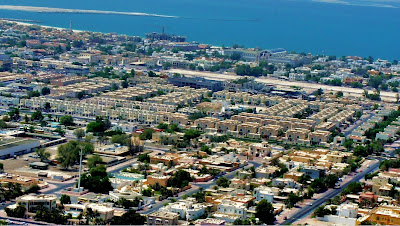 The city as seen from the rooftop of our hotel

In the morning, we could see the roads covered with sand the wind had whipped in apparently from a sandstorm the night before. A sobering thought - how long can man battle the elements? Will the sands of time close over the city? 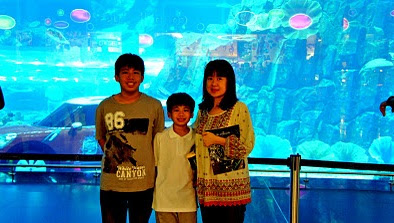 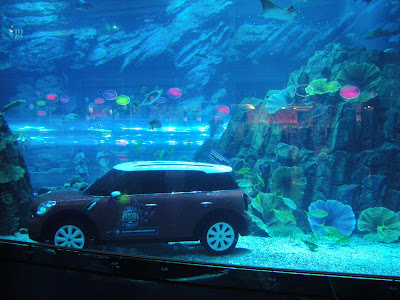 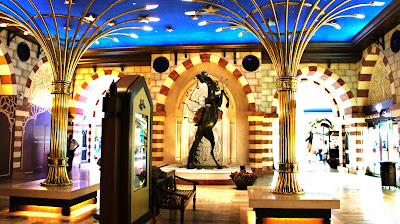 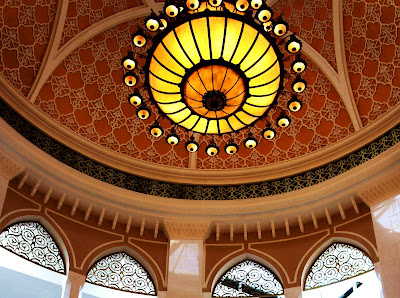 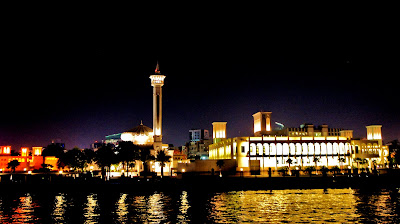 Pic taken in dhow as we were cruising down the Deira creek. More pics in upcoming posts!! 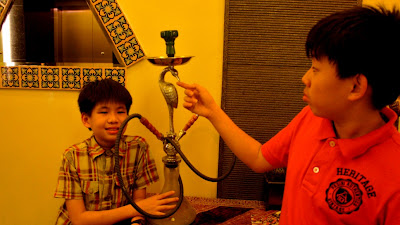 The boys checking out a hookah - An oriental tobacco pipe with a long, flexible tube that draws the smoke through water contained in a bowl. I couldn't help thinking of the hookah-smoking caterpillar in Alice In Wonderland! 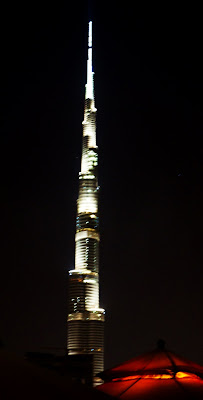 The Burj Khalifa as seen from our hotel rooftop.

Even with the wind blowing in our faces while we were at the rooftop at midnight, the heat was unrelenting. It was like standing in front of a hair dryer all day.

Expecting to see burkha-clad women and men in white robes, I was surprised to find that the locals were nowhere in sight! Our taxi driver was Sri Lankan, the hotel and airport staff were largely Filipinos and Indians and the driver who picked us up at the hotel to the jetty was a Bangladeshi! Later, I learned from the driver that the locals only make up 5 percent of the population in Dubai, the rest being foreign workers.

So what's my take on Dubai? A very happening place with superlatives (biggest, tallest, fastest and FAKEST! The climate is for camels, not people!

* I was told that everything in the metropolis is fake! The water is desalinated , the gentle breeze on the man-made beaches is blown by giant fans and even the trees are fake! In Dubai, they don't water but wash plants 'cos they are all fake!!!

Official Language Spoken
* The official language of Dubai is Arabic. However, English is widely spoken and understood.

Dress Code
* Dubai respects western style of clothing, but does not tolerate revealing attire. It is advisable to cover knees and shoulders. Spaghetti straps, low cut tops may be viewed as offensive. Bikinis are fine on beaches and swimming pools.

Alcohol Consumption
* Alcohol consumption is not allowed in public places but permitted in hotels, private parties, bar, clubs and restaurants.

Ramadhan Month
* Ramadan is the religious and sacred month of fasting and prayer for Muslims. Smoking, eating and drinking in public places are banned between sunrise and sunset. Alcohol is available in 5-star hotels but dancing and loud music are forbidden.

Photography in Public Places
* Care should be taken while clicking photographs in public places and of people. Seek permission while capturing shots of government buildings, malls and people unknown to you, especially women.

Greeting fellow Arabs (if you can find one!)
* To welcome a Gulf Arab, a handshake is sufficient. Men greeting women or vice-versa is not recommended. However, if the female offers a handshake it would be appropriate to accept it out of courtesy.