The Old Man And The Pelican 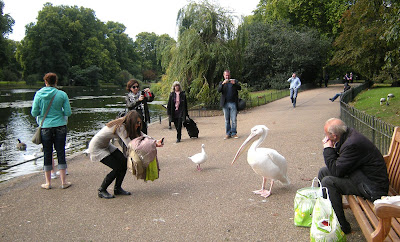 While cutting through Saint James Park to get to the Admiralty Arch, we came upon this big gorgeous bird that was attracting quite a crowd. It seemed to enjoy having its picture taken, shifting poses and moving its head to the side and front and tilting it up and down like a model during a photoshoot! 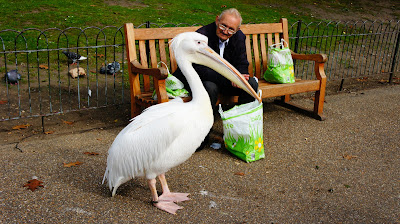 Alongside the gazillion of tourists and lunchtime snackers who had come to visit the park, we noticed an elderly gentleman who was seated on a bench behind the bird, gazing at it affectionately. 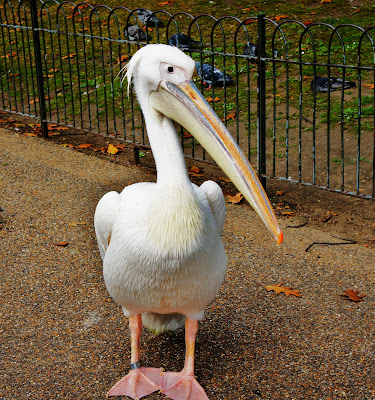 After snapping a couple of pics, we were out of the park and must have been gone for at least three hours before we came back in again, on our way back to the train station. To my surprise, the old man was still with the pelican though they were now in another part of the park. It appeared that everywhere he went, the bird followed. Those two obviously shared a special bond. 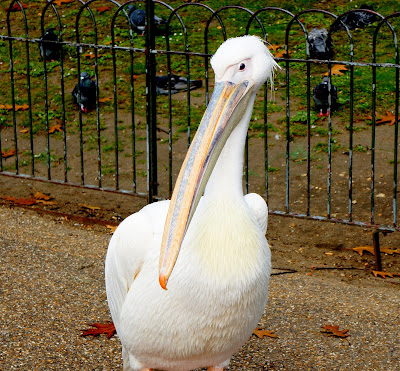 A friendship this special must have been forged over the years. I couldn't resist asking the old man if he came to the park regularly. Showing us a peanut he had fished out from  one of the 3 large plastic bags he was carrying, he explained that he traveled from Peckham to the park every 3 days to feed the pelicans. Like a proud father, he regaled us with stories of the pelicans' antics. Stroking the head of his feathered friend, he added, "This boy pelican here is very shy, unlike the girl pelican out there on the pond. She's the one who catches the fish for him."

Then he asked us, "Is this your first visit to England?" We nodded and with a salute, he greeted, "Welcome to England!"

Awwww! What a sweet old man!

* On googling, I learned that the boy pelican is Willy, as affectionately named by his fans. He's London's most photographed animal and the old man is Willy's biggest fan.
Posted by Veronica Lee at 12:43:00 AM