Of Friendly Ghosts, Spirits and Deities

While making these cookies, I recalled  a strange story my college roomie shared with me. The boy in the story was her neighbour. 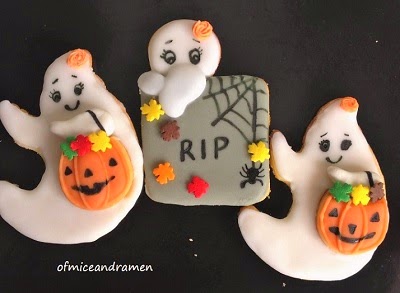 .
When Yusof was little, his parents thought he had an imaginary friend he was constantly interacting with. The conversations and pretend games were so real, it was hard to believe that the friend was imaginary. Yusof described his friend as a boy with an elephant face. At first, his parents thought he just had a healthy, active imagination but grew concerned when they noticed the imaginary conversations and games took place only in a particular room in the house. It was an unfurnished and unoccupied room and they had just recently moved into the rented house.  When Yusof began to spend an abnormal amount of time in the room, his parents began to wonder if the 'friend' was more than just a figment of his burgeoning imagination. They decided to consult a bomoh (a Malay shaman) who, in a trance, revealed that the half-boy half-elephant friend was actually Lord Ganesh, the Hindu elephant deity. And the room that was the playground for Yusof and his invisible playmate was used by the previous occupants as their puja room. A puja room or a prayer room is an intrinsic part of every Hindu household. A visit to their landlord who previously resided in the house confirmed this. An idol of Lord Ganesh used to occupy the exact spot in that room where Yusof loved to play! The landlord brought a Hindu priest to the house and several rituals were performed which included mantras and offerings of  laddus (sweets), incense sticks and a garland of scented flowers. From that day forward, Yusof never saw his elephant buddy again! Uncanny but true!
Posted by Veronica Lee at 8:40:00 PM