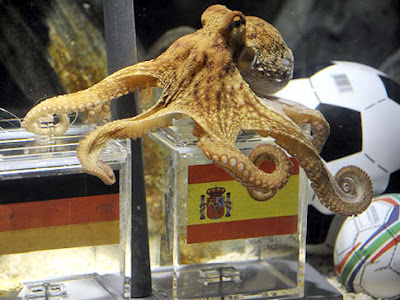 THANK YOU, PAUL! THANK YOU! THANK YOU! Thanks to Paul, the clairbuoyant octopus, I'm now 10 ringgit (USD3) richer. What? All that excitement over 3 dollars?!! Nah, it's not the money, it's the fun of winning a bet and bonding with Hubby and the boys over a ball game. What's with men and balls? Seriously, I'd rather be doing the dishes but I want the boys to think Mom is cool.
For the uninitiated, Paul is the famous soccer forecaster octopus who's making waves in cyberspace. He's even on Facebook with 93,520 fans at the last count! Of course, there are those who wish to see him end up as sushi on the menu.
After knowing about Paul, I don't think I can ever eat another takoyaki again. Somewhere in one of those er... balls, there could be a psychic octopus who could take Paul's place. After all, the days of our 2 1/2 year-old friend are numbered. An octopus' life span is 3 years which means Paul will not live to see the next World Cup. How sad!

Here are 10 things you didn't know about Paul.

Although he now resides at the Aquarium Sea Life Centre in Oberhausen, Germany, Paul was actually born in Weymouth and moved from the town's Sea Life Park in 2006.
Fiona Smith, from Weymouth Sea Life Park, told the Dorset Echo: “He never made any predictions while he was living here but maybe he was waiting for a big event like the World Cup until he revealed his abilities.”

Argentine chef Nicolas Bedorrou was so angry after Paul correctly predicted his team would lose its quarter-final clash with Germany that he suggested a way to cook the octopus.

He posted on Facebook: "We will chase him and put him on some paper. We will then beat him (but correctly!) in order to keep the meat tender and then put it in boiling water."

Paul's predictions have gained so much popularity that German news channel NTV has started to broadcast his predictions live, with two reporters situated next to his tank so they can bring their viewers all the latest goings on.

4. He's the biggest celebrity in Oberhausen

Having wowed the world's media with his predictions, Paul has put the mundane Germany city of Oberhausen on the map. Oberhausen, which is twinned with Middlesbrough, also boasts such sights as Germany's biggest shopping centre and Europe's largest disc-type gasometer. Worth a visit then ...

5. He's got a good track record

Paul began to predict Germany's results during the Euro 2008 tournament, correctly choosing the winner in four of Germany's six matches. He predicted Germany to win every match but was wrong when they lost to Croatia and in the final to Spain. So far at the World Cup 2010, Paul has correctly predicted the winner of each of Germany's five matches.

6. He could have made you a packet

Having correctly tipped the winner of Germany's five World Cup matches, backing Paul's tips could have netted you a few squid (sorry).

A £1 accumulator bet on all five results would have won you £131, which could comfortably buy you a few bags of mussels.

Octopuses are highly intelligent animals and have been proven to have a strong short and long-term memory.

Fiona Smith, head of animal care at Weymouth Sea Life Park said: “Common octopuses like Paul are very intelligent. We equate their intelligence with that of a dog and they love problem solving and figuring things out."

Paul has become an online phenomenon over recent weeks and is now one of the most talked about topics on the web. The phrases "Paul the Octopus" and "Pulpo", the Spanish word for octopus, are both currently in the top 10 global trends on Twitter.

Paul predicts results by opening one of the two flag-covered plastic food containers in his tank. Tanja Munzig from the Sea Life Centre in Oberhausen has denied any suggestions that the containers are rigged.

She said: "There are no tricks, the food is the same and everything in the two containers is the same except for the flags."

10. He's not scared of death threats

According to his keeper, Oliver Walenciak, Paul is unfazed by a series of death threats sent by Argentinian supporters who blame the octopus for their World Cup exit.

He said: "There are always people who want to eat our octopus but he is not shy and we are here to protect him as well. He will survive."