Q. What fruit looks like a sea-urchin and smells like the city dump on a hot summer's day?

Here are other descriptions of the unforgettable odour of a durian - stinky socks, butane gas, rotting fish, Camembert cheese, skunk spray etc. The husband of a Malaysian pally visiting from America described the taste of durians as 'eating custard in the toilet' .Chef Andrew Zimmern compares the taste to "completely rotten, mushy onions while the 19th-century British naturalist Alfred Russel Wallace famously described its flesh as "a rich custard highly flavoured with almonds." 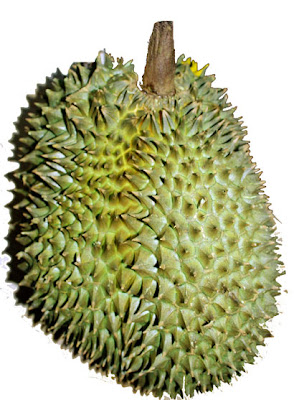 Hailed as the "King of Fruits" in Southeast Asia, the durian is formidable-looking with its spiky husk.The world durian means 'thorny' in Malay and Indonesian. Once, I witnessed a street fight when rival gangs were hurling the lethal fruits at one another. 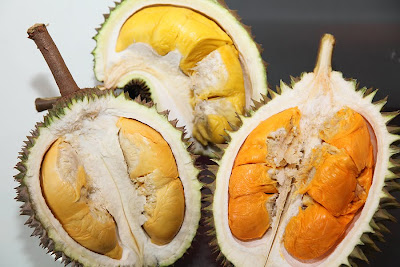 The pale yellow flesh emits a very pungent odour that lingers for days. While durian aficionados find the aroma heavenly, others regard the smell as overpowering, malodorous and disgusting. 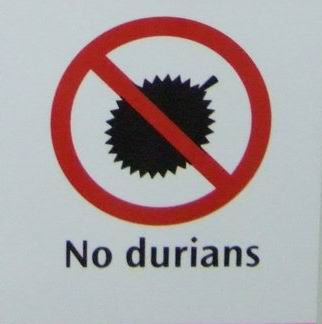 In Southeast Asia, it is not uncommon to see signs like this prohibiting the fruit in hotels, hospitals and public transportation. 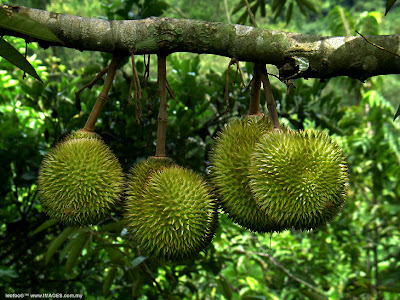 The fruits are not plucked from the trees. Ripened fruits that fall to the ground are collected. It is believed that a durian has eyes and can see where it is falling because the fruit allegedly never falls during daylight hours when people may be hurt. Rarely have I heard of someone hit by a falling durian!

When our Danish neighbours first moved into our condo, they reported the smell of leaking gas to the management office. Upon investigation, it turned out that the odour came from one of the units where a durian party was held!!