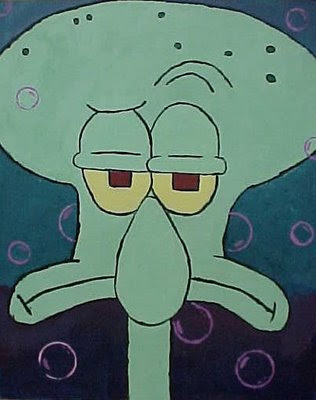 My question is "Who is your favourite cartoon character?"

I love Squidward Tentacles! He's the most misunderstood character in Bikini Bottom. Even his name is a misnomer! He's actually an octopus. To most, he's a grouchy, stick-in-the-mud old meanie but I think he's one classy octopus who's really an old softie deep inside. He loves SpongeBob more than he cares to admit. He is well-educated, plays the clarinet, sculpts and paints and even does interpretive dance. His idea of a Sunday is eating bon-bon and having a foot massage and pedicure. I would consider dating him if he were human except that he's rumoured to be gay!

Here are some random facts about Squidward.

2. His middle name is Johannsen ?

4. His character is voiced by Robert Bumpass ?

5. His rival is Squilliam Fancyson?

6. Squidward's name is a combination of the word 'squid' and the name 'Edward' ?

7. His favorite song is "Solitude in E Minor?

8. He's claustrophobic? (though when Patrick asks what it means, Spongebob says that it means he's afraid of Santa Claus) ?

10.He wears a pair of pink bunny slippers?