Someone said that the Dutch people are the nicest people in the world until you set foot on their bicycle lanes!!! Then they go crazy!!! And that statement rings true!  Don't mind the pun.


I unwittingly stepped onto a brown lane when I got off a bus in Amsterdam and a gray-haired granny on a bicycle who almost bowled me over rang her bell furiously and yelled, "Kanker op tyfus toeriste (cancer on typhoid tourist) !" in my face.

I learned fast that those reddish-brown paths are bike paths, NOT sidewalks and the most important Dutch sound you need to know is TRING, a warning rung by Dutch cyclists. When you hear it, you should clear out of their paths … pronto!  A Dutchie on a bike doesn't stop!

In a country where there are more bicycles than people or cars, Dutch cyclists rule and have the right of way in most situations. They yield to no one and have zero tolerance for pedestrians especially tourists. A friend who recently visited The Netherlands said she was almost run over by a lady cyclist with a wheelbarrow (bakfiets) full of kids! 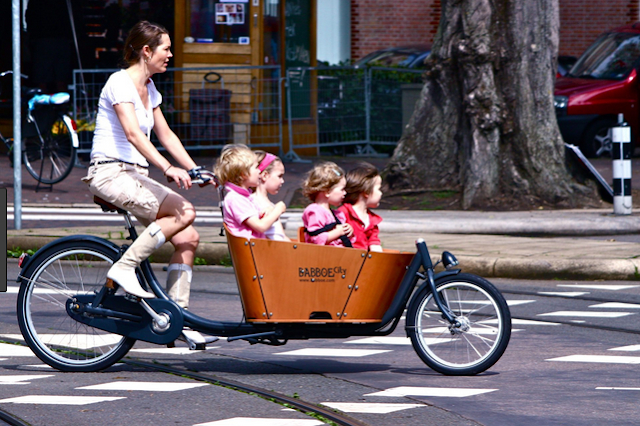 Amsterdammers of all ages, income groups and descriptions go to work, to school, to the grocer's, to the bank, to a party, to a wedding, etc on their bicycles. And they don't wear helmets! It makes sense 'cos that would totally mess up your hair!

I saw a lady cycling with one kid behind her on the bike, one kid in front, grocery bags dangling from the handlebars and a dog in the front basket! And she was holding an umbrella!

On the way to a wedding...
Who needs a van when you have a bakfiets!

Now, where did I park my bike!? 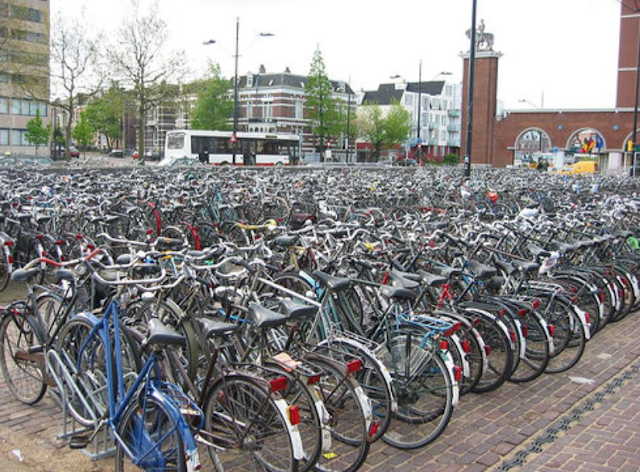 So stay away from their bike paths of death and listen carefully for those angry bicycle bells lest you be yelled at with different diseases!