While ambling along the streets of Amsterdam, we turned into a corner and ended up in a passageway that looked like a secret portal to Hogwarts. Turned out, the arched walkway was Buerspassage, an art installation that was created to pay homage to the city's famed canals.

Artists used things that end up in Amsterdam's canals to create a walkway that gives the illusion of walking through an underwater tunnel along the bottom of a canal with fish, air bubbles, reflections, an assortment of objects  gliding and floating above you – bicycles, umbrellas, cogs, boat parts, liquor bottles, etc  and yes,Vincent van Gogh's ear!

The artwork, named Amsterdam Oersoep meaning primordial soup, is a visual narrative that tells the story of how all of Earth’s life forms originated from water. 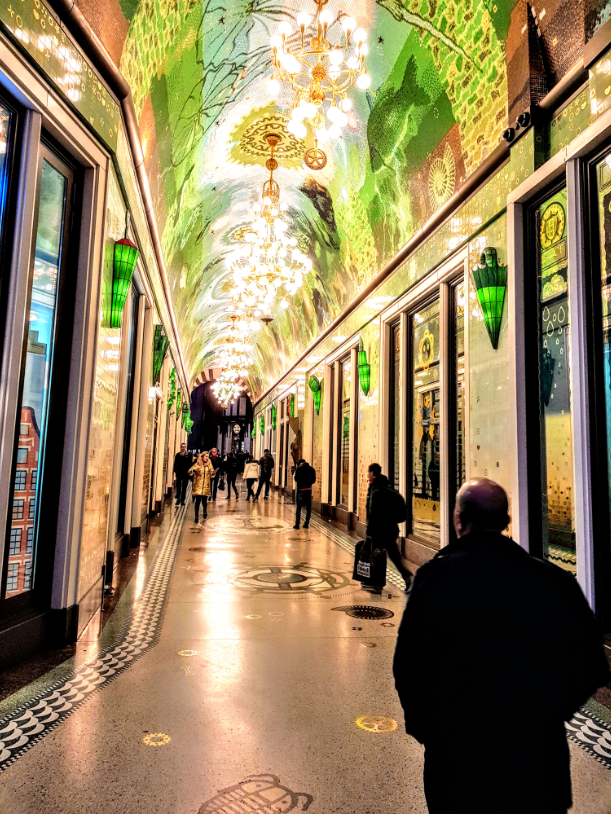 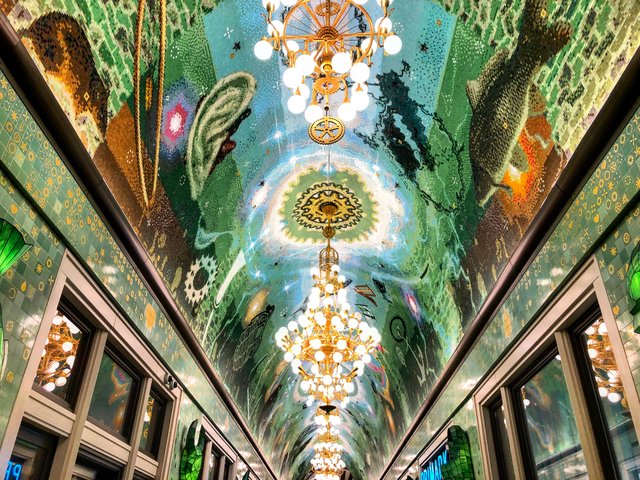 The seven chandeliers and Art Deco mirrors are made of recycled bicycle parts. Each year Waternet, Amsterdam's Water Authority, fishes between 12,000 and 15,000 bicycles from the canals! The bikes were either discarded deliberately, or tossed in by drunks.

The  barrel-vaulted ceiling is covered in 450 square metres of glass mosaic in hues of green. Each art piece, from the floor to the ceiling, has symbolic references to the city of Amsterdam, its history and its future.

“The ceiling for example contains a tube of paint that flows into a rainbow referring to the colorful nature of Amsterdam, its tolerance for the LGBTQ community but it also contains the image of a tiger, liquor bottles, fish, rats and numerous art historical references to famous artists like Van Gogh and Rembrandt,” explains Hans van Bentem. “This work is a journey through the history of Amsterdam, its main arteries, the canals. A crowd stopper, freezing a moment in time thanks to its elaborate craftsmanship and rich materials, celebrating our everyday source of life: our holy water.”

Fourteen stained-glass sconces handcrafted in the shapes of an umbrella, French fries, a tulip, a wooden clog, the city's coat of arms, etc  adorn the walls.

Hmmm, how is an umbrella Dutch? I am guessing it's one of the items often fished out from the canals.
I love the humour of the artists. The flaming spliff sconce, the red stiletto (a winking reference to the red-light district) and Van Gogh's ear on the intricate mosaic ceiling are such a witty tribute to multifaceted Amsterdam. 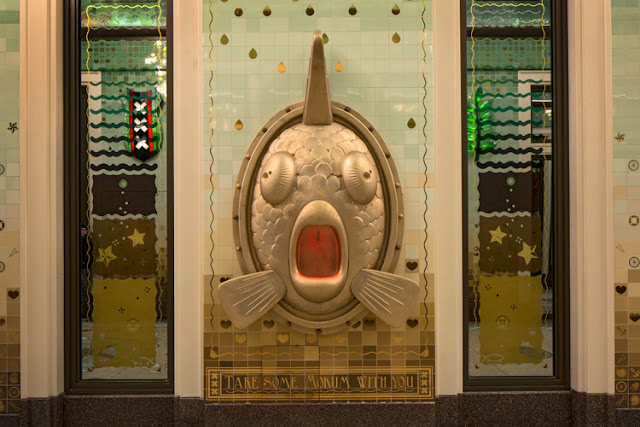 My favourite piece is this giant fish fountain on the wall with an open mouth. Below the fish are the words Take Some Mokum With You. Mokum is a nickname for Amsterdam. If you stick your water bottle in the mouth, the red light turns blue, and your bottle will get filled with drinkable water though there is a running joke that the water is probably from the canals!!