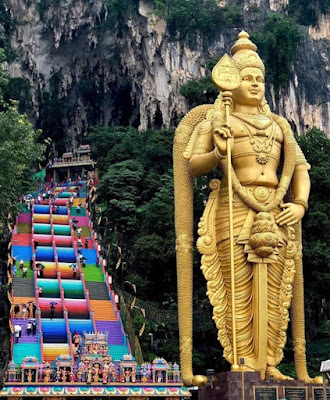 It certainly is very colorful!

Well...I think it might make the climb more interesting, but from a distance, it's sort of blinding.

Wow beautiful capture . I look the Hindu god sculpture too . Keep commenting in my blog because I love your comments.

What a difference - so colorful!

The colors are so mesmerising! It makes you walk up slightly easily I guess, as your attention was diverted to those popping color steps

Oh those steps look wonderful.. I have been to the Batu Caves.. many many years ago.. I'm going to guess and say about 15 years ago.. don't remember much about them except for the monkey.. but with those beautiful steps I'm sure they will be so much more memorable.

The colors on the steps certainly draw your eye that's for sure. I love the statue leading to the steps as well:) #GlobalBlogging

Amazing, I would love to go there!

intriguing. although, I think I like the stairs more without paint ;-)

What lovely photos so colourful, I think the stairs look better colourful :-)

I know the place is one of top destinations in Malaysia.
Have a great day

Oh wow, this looks lovely and colourful. I would love to see this.

Wow! I love what they did with the steps. It looks like anime come to life.

What fun, it makes a stunning photo #BloggersBest

It's beautiful and I love all the colors.

Have a fabulous Wordless Wednesday. 😎

Oh wow! That looks amazing! I love all the colours x #bloggersbest

Wow, that's amazing to see the stairs before the painting. It must have taken a long time.

That is absolutely beautiful

Wow, that is beautiful! I love the statue too, how breathtaking. Thanks for sharing! Have a great week :)

This is amazing!!! I can not believe the colors. #thatfridaylinky

I like how the "credit" photo is super vibrant and "edited" lol. Thanks for posting a "REAL" photo of what we can expect should we ever visit this site. #ThatFridayLinky

The bright colours are sooooo beautiful. It must be incredible to see it in person. Thanks for linking up with #globalblogging

These colors are amazing! #thatfridaylinky

I love it - colors and form. They are so pretty!

Being A Wordsmith said...

Thanks for sharing this beautiful post on Traffic Jam Weekend. It is my pick for featured fave for the party going live today at 5:00 pm CST.