I am not a big fan of monkeys, macaques in particular. I am cool with orangutans and chimpanzees and could even love King Kong. But macaques? They’re evil. Pure, pure evil.

When I was in primary school, we had a teacher who wore a glass eye. Word had it that a macaque scratched out her eye.

And thus began my aversion for macaques.

A terrifying encounter with these nasty little buggers when I was little kicked my dislike for them a notch higher.

We were on a road trip to Penang to visit my aunt when Dad decided to stop at the Botanic Gardens for a break.
Inside the car was a big bunch of rambutans we had brought along for our aunt. 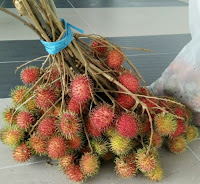 We got out of the car to explore the gardens, leaving the fruit behind.

Upon our return to the car park, we were shocked to see a gang of marauding macaques inside and atop our car! Rambutan shells and seeds were scattered everywhere! Evidently, the monkeys were having a party, chattering loudly and feasting on their loot!  Dad must have inadvertently left one of the doors unlocked. Those sneaky little devils managed to open the car door and nick our rambutans!

When Dad tried to shoo them away, they started shrieking loudly, baring their fangs and thumping their chests! One even threw *poo at us! JERKS! They really scared the crap out of me!

*I've read somewhere that monkeys use their feces as weapons!

My dislike for these obnoxious critters upped another level when I was at the Uluwatu Temple in Bali with my cousin. A macaque sneaked up behind me and my unsuspecting cousin, snatched the sunglasses off  my cousin's face and skittered up a tree! We were both traumatized by the incident and my cousin has since developed a phobia for monkeys.

Interestingly, did you know that the macaques in the Uluwatu Temple are a monkey mafia of sorts?!! These nefarious monkeys steal stuff, then barter for food!

I had yet another run-in with these thieving little buggers during our recent vacation at Club Med. 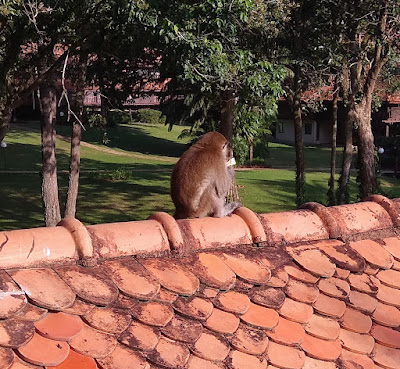 Returning to our hotel after a walk on the beach, we opened the door to find two macaques inside the room and they were going through our luggage!

The hubs scared them off but one of them had already grabbed a tube of Pringles before fleeing!

I was (still am) certain that I had closed the sliding door to the balcony before leaving the room, very well aware of the presence of  these accomplished burglars in the resort. Somehow, they got in. 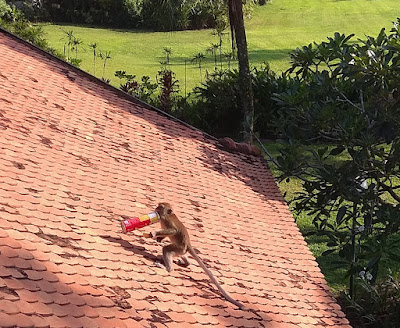 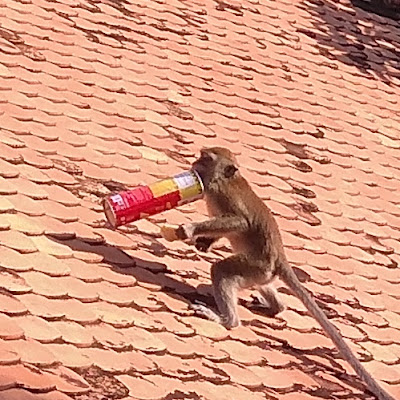 This one hissed and flashed his willy at me when I nervously tried to chase it away! What a charmer!
I have been cautioned  that macaques are vindictive and you seriously don't want to mess with these vicious, conniving imps. A friend of mine  told me a macaque hopped onto his shoulders from a statue behind him and peed on him when he was in a temple in Thailand!