Rodney and I were chilling at a cabana in Club Med when a ginormous lizard that looked like it had just crawled out of Jurassic Park approached us.
On any ordinary day, I would have freaked out big time and out-sprinted Usain Bolt to safety! But I had earlier read about the presence of these friendly monitor lizards in the resort and was actually looking forward to meeting one.

These critters are everywhere at the village resort. They don't look too friendly, do they? Apparently, they are not interested in humans as meals despite their scary appearance.

Rodney named it Fred because it looked like a Fred! 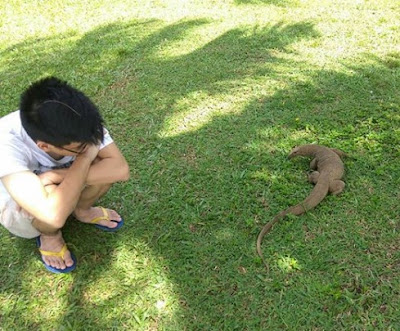 Fred seemed to enjoy our company and hung out with us the whole morning. He even snuggled up to Rodney's feet!

While I was reading a book and Rodney was messing with his phone, Fred dug holes around our cabana, presumably looking for food.  Now I know why there were curious holes all over the resort grounds! 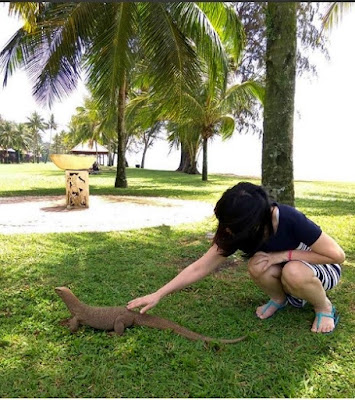 Fred allowed me to touch him! His skin felt kinda scaly and hard; not my idea of a warm and cuddly pet though!

When it was time to say goodbye, we were kinda sad to leave our newly acquainted friend.

Fred's buddy. This one had a huge belly and was chowing on pancakes! 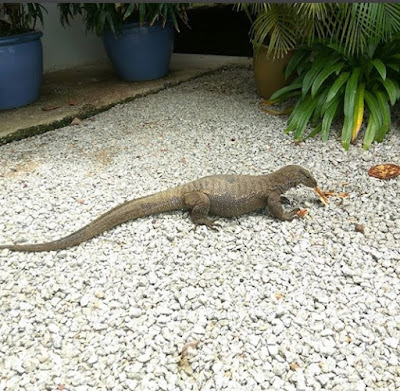 Monitor lizards (Varanus Indicus) are carnivores. They use their venom to kill their prey. Fortunately, the venom has a relatively mild effect on humans.
These lizards are naturally shy and would rather stay away from humans. Like most wild animals, they do not attack unless provoked. As long as you keep your distance and leave them alone, you will be fine.

On the rare occasion that you are bitten, seek medical attention immediately. Although their venom is not fatal, the main cause for concern would be bacterial infection from the bite.


Another one of Fred's buddies 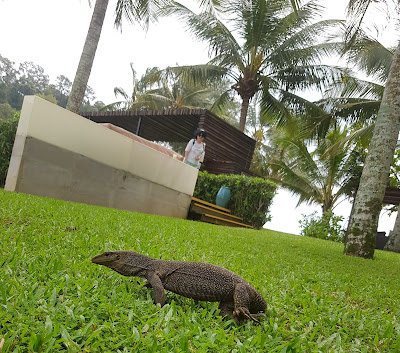 The above photos taken by my crummy phone don't do justice to how a real monitor lizard looks like.

Below is a photo I snagged from the internet just to give you an idea how formidable it really is.

In Chinese, we call it "four-legged snake". It kinda looks like a cross between a snake and an alligator.

Often, these monitor lizards are mistaken for Komodo Dragons, their more aggressive cousins. Those, you don't want to mess with. Trust me! Their saliva is extremely venomous
That forked tongue!