Remember my goat story three years ago? He came to 'pet' me when we were visiting the village where hubby's uncle lives. Story here. I've just found out the goat's name is Manja (pampered in Malay).

We were driving into the village to visit Uncle Beng during the Chinese New Year when we saw Manja, now a full grown billy goat, charging head-on towards an oncoming motorcyclist and head-butting the vehicle! Next, the old goat rammed his head against a tree nearby when the man on the motorcycle chided him!

Uncle Beng explained that Manja had wandered too far off into the next village and the owner had to look for the old goat to herd him home. Manja wasn't quite ready to return to his pen and like a spoilt brat, he was throwing a tantrum!

Suddenly, Manja started to bawl hysterically as if something spooked him. He darted back into his pen on his own. According to Uncle Beng,  the old goat went weird because he knew it was going to rain. And sure enough, within minutes, raindrops came pouring down!
Apparently, Manja is one spoilt goat, hence the name. As the villagers were largely Hindu, Manja is considered a sacred animal and is honoured and revered. Hindus believe that animals may contain the souls of their ancestors or may be reborn as friends and family members. Besides, Manja's weather forecasting ability makes him even more important! He is a reliable weather vane and his predictions are 90 percent spot-on. In fact, the villagers count on him to tell them when it is going to rain. If he is near his pen, rain is expected. If he is far out in the next village, the weather will be fine!

Evidently, goats hate water. I wasn't able to google for a scientific answer. Veterinarians have not identified any reasons. Goat breeders don't have the real answer either and so far no goat whisperer has come forward with an explanation! It would be really interesting to know why. 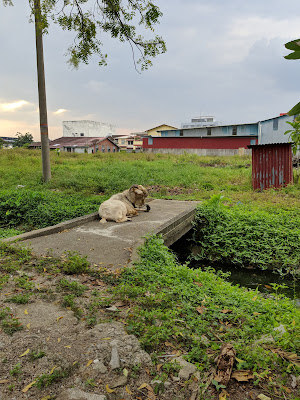 I wanted a take a selfie with Manja but Uncle Beng cautioned that the ornery old goat was likely to head-butt me.

After watching this video, I am sure glad I didn't!