Pork and Yam is a traditional Hakka dish which is not easy to prepare. It requires several cooking processes. Chunky pieces of pork belly are first boiled, then deep-fried and steamed for 3 to 4 hours. The meat is sandwiched  between slices of fried yam and then steamed in a sauce made with a long list of ingredients (rose wine, fermented bean curd, star anise, sesame oil......) until the meat is tender enough to melt in your mouth.

When I visited my parents last week, I thought I'd surprise them with the Yam & Pork dish I had made from home. At 88, my mom hasn't been cooking for a long time. She used to make this family favourite whenever she had friends and family over.
Mom eyeballed the gooey mush on her plate suspiciously, protesting that it looked nothing like the recipe she taught me.
I had kinda tweaked the recipe a little to make it healthier, replacing the artery clogging belly pork with lean pork and cutting the meat and yam into bite-size pieces and stewing them in a crock pot instead of steaming for 3-4 hours. Mom was certain that Grandma would roll over in her grave if she knew what I had done to her recipe. Reluctantly, she tasted a small piece of the meat and commented that it didn't taste anything like the original recipe either. Er...did I mention that I had substituted the rose wine with brandy and kinda went a little crazy with it, to give the dish....well.... more spirit?!
Grandma must be spinning in her grave.
What it should look like

SPAGHETTI IN A BREAD - You can't go wrong with this one!

Instead of bread dough, I used store-bought puff pastry sheets and it turned out just as great! 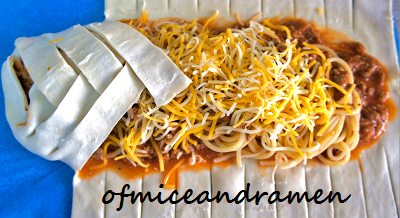 Make cuts on the sides of the dough. Next, wrap the filling in a lattice pattern

Looks like I need to work on the braiding technique!

Later, I learned from the following video that cutting slanted strips would've been much easier!

SWEET AND SOUR PORK CHOPS (MALAYSIAN STYLE) - Undisputedly the most popular Chinese dish of Cantonese origin.
The Malaysian version is a little different than your American Chinese take-out - a little less sweet and flavoured by the addition of worcestershire sauce. 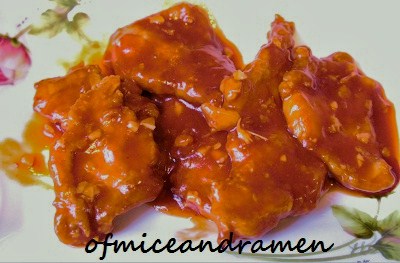