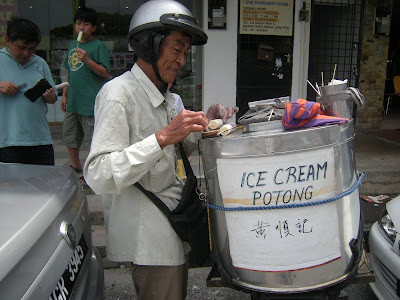 One of my favourite things I grew up on was the sound of a handbell ringing in the distance. It could only mean one thing - the "ice-cream potong uncle" was making his rounds in the neighbourhood on his trusty old bicycle. 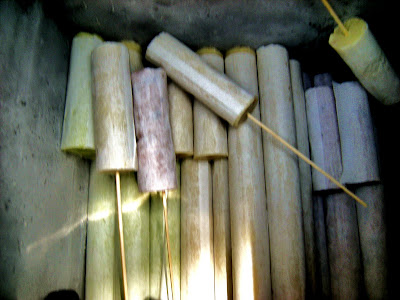 A peek inside 'uncle's container

"Ice-cream potong" literally translates as 'cut ice cream'. Back in those days, when not every household enjoyed the luxury of a refrigerator, ice-cream potong was a popular treat among kids and even adults especially on hot days in Malaysia where the weather is summery all year round. The popsicles were frozen in long rolls and wrapped in thin paper. 'Uncle' would cut the rolls into the length you requested, then skewer the cut popsicle with a stick made from the spines of coconut leaves. The popsicles came in a variety of flavours, usually durian, chendol, corn and red-bean.

A rarity nowadays, I was delighted and surprised to find an ice-cream potong seller on a recent visit to my hometown. Curious, I asked 'uncle' how his business was in these times. He lamented that kids don't seem to enjoy the traditional popsicle these days and he could probably be the last ice-cream potong seller we see around.

Saddened by the thought, I wistfully savoured my last 'real' ice-cream potong. Sure, you could always get them at the frozen department in supermarkets where the popsicles are sold in pre-packed boxes but they aren't nearly quite the same.
Nothing quite compares to the pleasure of hearing that familiar 'ding a ling a ling' sound and uncle's shouts of 'ice-cream potong' as we kids raced against one another, coins jingling in our pockets, to be the first in line to get the icy cold treat on a sweltry day. 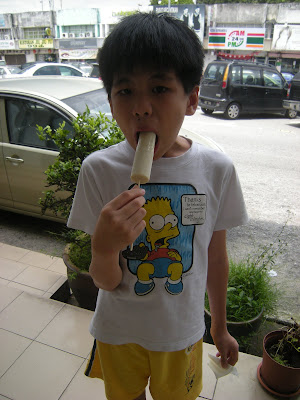 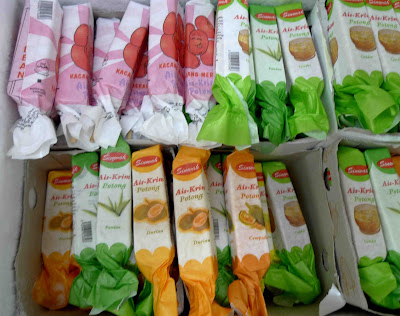 Ice-cream potong sold in the supermarkets
Posted by Veronica Lee at 8:28:00 PM