The Writing On The Wall

Patience is certainly a virtue my son, Josh, sadly lacks.

Growing up, Josh had quite a temper and his raging outbursts when things didn't go his way used to cause me great alarm.

I recall a funny (not so funny then) incident that happened when he was little.

Josh was attempting to fly his kite together with his younger brother and cousin when all three kites became entangled.

The boys tried to unravel their strings. While the other two patiently worked on the tangled mess, Josh gave up and threw a hissy fit. He started to shout and stamp about, impatient to get his kite flying again.

We were in my uncle's village and there were chickens running around.

Suddenly, a cockerel that was perching on a fence near Josh started to crow loudly.

"You! Shut up!" Josh yelled angrily at the cockerel!

Several villagers who witnessed the whole incident burst out laughing!

*"Ayam pun kena marah!"  One of the villagers remarked amusedly in Malay.

*Loosely translates as "even the chicken gets scolded"

I was more angry at his bad behavior than amused but looking back, it was pretty hilarious!

You should have seen the look on the cockerel's face!

After the chicken episode, I stuck this wall decal in Josh's room as a daily reminder of his short fuse. 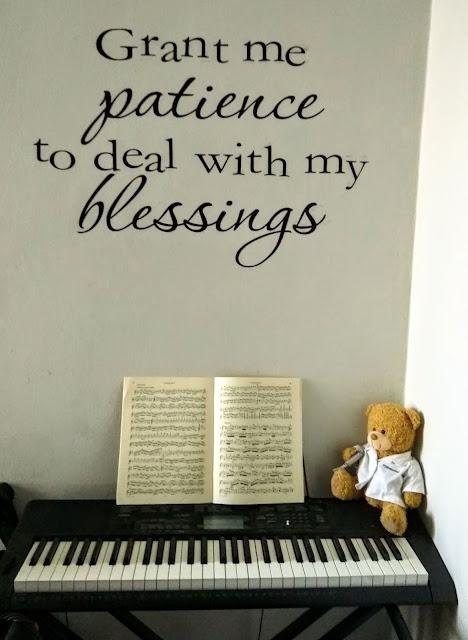 I am happy to say that over the years, he has learnt to tame his temper.
Posted by Veronica Lee at 8:49:00 PM