The Lion of Lucerne 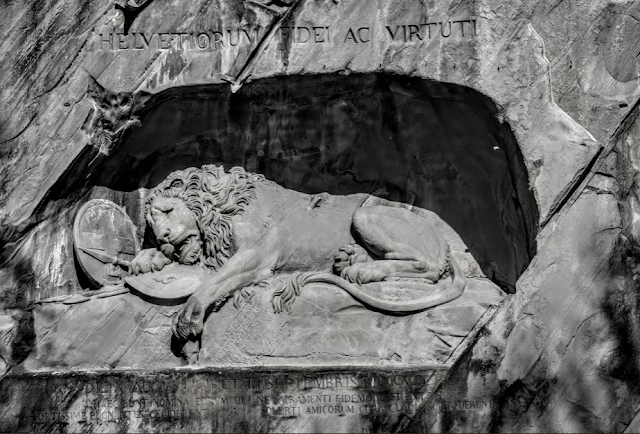 Curled in his den above a pond, impaled by a spear, is a dying lion – a haunting monument to the Swiss soldiers who were killed protecting the French king during the French Revolution. 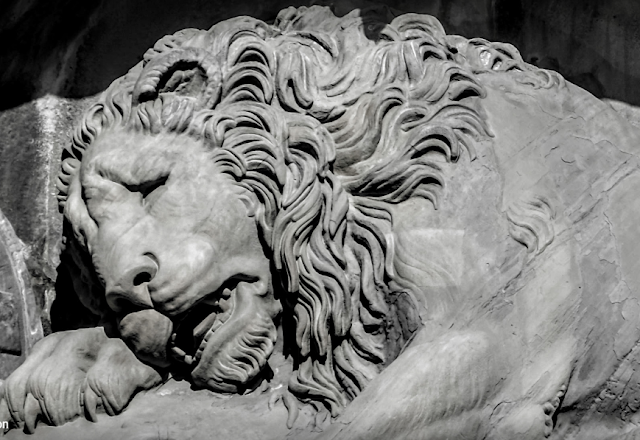 More than 700 Swiss soldiers were massacred defending King Louis and Marie Antoinette in an attack on the Tuileries in 1792.

The dying lion is allegorical of  the soldiers’ courage, strength, and willingness to die rather than to betray their oath of service.  Mark Twain described it as “the most moving piece of stone in the world.”


The Lion lies in his lair in the perpendicular face of a low cliff – for he is carved from the living rock of the cliff. His size is colossal, his attitude is noble. His head is bowed, the broken spear is sticking in his shoulder, his protecting paw rests upon the lilies of France. Vines hang down the cliff and wave in the wind, and a clear stream trickles from above and empties into a pond at the base, and in the smooth surface of the pond the lion is mirrored, among the water-lilies.

Around about are green trees and grass. The place is a sheltered, reposeful woodland nook, remote from noise and stir and confusion  – and all this is fitting, for lions do die in such places, and not on granite pedestals in public squares fenced with fancy iron railings. The Lion of Lucerne would be impressive anywhere, but nowhere so impressive as where he is. 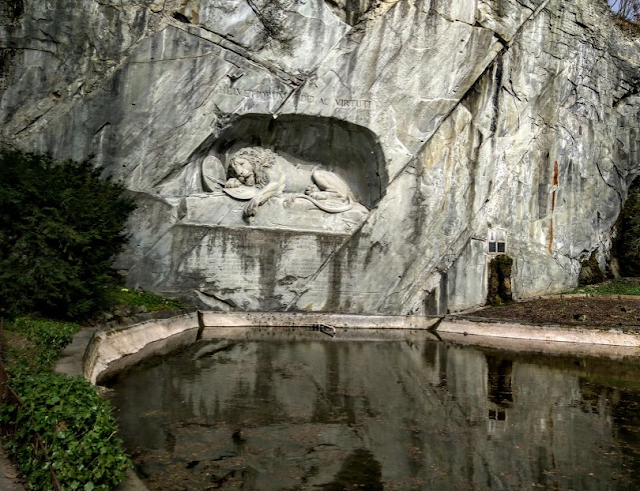 Above the mournful lion is the Latin inscription, “HELVETIORUM FIDEI AC VIRTUTI,” which means “To the loyalty and bravery of the Swiss,” and below the lion’s niche is a list of the names of the fallen officers and the approximate numbers of soldiers who died (DCCLX = 760), and survived (CCCL = 350).

The tragedy was that their noble sacrifice was in vain.

On that fateful day, a contingent of 900 Swiss Guard mercenaries guarding King Louis XVI at the Tuileries Palace in Paris found themselves surrounded by an angry mob of some 30,000 French Revolutionaries. The mob demanded that the mercenaries step aside; the mercenaries refused. More than 700 of the Guard lost their lives in the battle that ensued, willing to die for the man they had been hired to protect, King Louis XVI.

No one bothered to tell the Swiss Guard that they were guarding an empty palace; the king and his family had already snuck out and fled.

THE LION INSIDE A PIG

Although thousands of visitors throng the monument daily, few realize that there are not one, but two different animals carved on the sandstone.

The initiative to create a commemorative sculpture was taken by Karl Pfyffer von Altishofen, an officer of the Swiss Guard who was on leave in Lucerne during the August 10th massacre. He put up a public appeal for funds and commissioned  Danish sculptor Bertel Thorvaldsen to design the monument.
Although many contributed, the money collected was not enough to pay Thorvaldsen. The liberals, in particular, disapproved of the monument  The lack of funds did not discourage Pfyffer, who somehow managed to persuade Thorvaldsen for the job. According to the Thorvaldsens Museum Archives,
Pfyffer deliberately hid the truth from Thorvaldsen until the delivery of the model of the sculpture was secured. Upon discovering that he was shortchanged, the irate Thorvaldsen decided to get even by adding some last minute changes to his design. The artist didn’t alter the sculpture itself, out of respect for the fallen soldiers. Instead, he changed the shape of the alcove where the lion lay to resemble the outline of a pig! 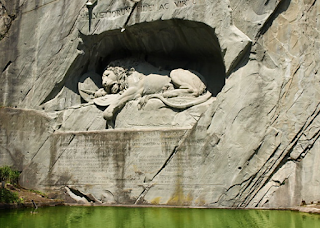 Can you see the pig?