Of Ghosts and Bananas

Know what this is? 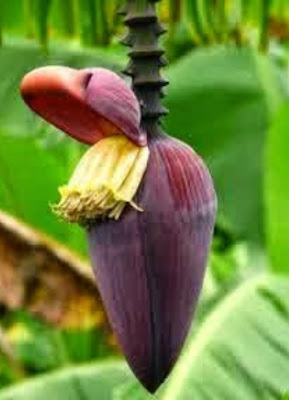 It's a banana heart!

Also known as banana blossom, this purplish flower of the banana plant hangs at the end of the stem holding a cluster of bananas. 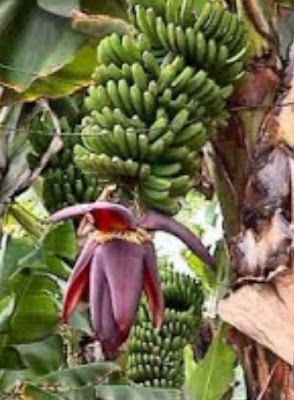 The flower is edible and common in Southeast Asian cuisines.

When we were little, we were forbidden to hang around banana trees as our elders believed that these trees harboured ghosts!

With Halloween just around the corner, I thought it would be fun to share a few of the banana ghost folktales I grew up on.

Hantu Pisang (Malaysian)
According to the Mah Meri (an indigenous tribe of Peninsular Malaysia), the banana heart transforms into a beautiful young woman when it is pierced with a nail attached to a thread. She seduces men and then takes away their souls!

Ba Jiao Jing (Chinese)
A wailing female spirit who appears under a banana tree at night, sometimes carrying a baby.  It is believed that gamblers can summon the spirit to ask for “lucky numbers” in the hope of striking the lottery.
A red string is tied to the banana heart and the other end of the string is tied to the bed of the person invoking the spirit. At night, the banana spirit will visit  her captor and begs to be freed. In return, she will bestow them a set of winning numbers. A horrible fate awaits those who fail to release the spirit after winning!

Nang Tani (Thai)
A lady ghost who dwells in wild banana tree groves. She is supposedly very beautiful and wears a green traditional Thai costume. Hiding in the day, she will only appear at night when the moon is full. Generally, the Nang Tani is not malevolent and will only harm bad men who mistreat women.

Men who cheat on their wives, BEWARE!

In Thailand, it is not uncommon to see banana trees tied with colorful satin cloths — an indication that the trees are inhabited by Nang Tani. Cutting down these trees will incur her wrath.
image source - https://thaivillage72.wordpress.com/

A late cousin of mine  was told that if she smeared her blood onto a banana heart, she would be able to see a banana ghost/spirit. A very curious teenager then, she conducted the experiment. Nope, she did not see the banana ghost/spirit but she was never the same again after the incident. She fell into a deep depression, turned to drugs and alcohol and attempted suicide a couple of times. She died of cancer at the age of 43. She was diagnosed with bipolar by several doctors but our elders believed that she was cursed by the banana ghost/spirit she invoked. Really, who's to say?

When I was in college, I stayed in a rented house with 3 other tenants. And yes, there was a banana tree in the yard. One of the tenants claimed  he heard a female voice singing at ungodly hours on several occasions. Yes, the sound came from the direction of the banana tree! The rest of us didn't hear anything though.

We never knew for sure if he was just pulling our leg but he did move out in a hurry!

Fascinating about the banana tree and the stories behind it. I think I would stay away from one if I ever saw one!

I didn't know all these things about a banana tree. I've never seen a real banana tree either. We have palm trees there.

Have a fabulous day. ♥

Have a great day

Beautiful shot. Keep commenting on my blog because I love your comments.

I learned something new. Thank you!

Wow these are all so interesting..and spooky.. we have a ton of similar folktales and myths attached to certain trees and nighttime.. Never heard any about the banana plant.. thanks for sharing!

Interesting post I liked the photos and close ups and now I want a banana LOL :-)

I know it! I know it very well..and I love the stew of banana heart with creamy coconut oil. And all those ghost stories! oh my...

I know nothing about bananas except that I love to eat them! Thanks so much for sharing!

WOW! That is cool! Never seen anything like that before! Have a great week!

I never knew the spooky stories behind these trees. Ha! I've only seen one banana tree in my life - our Botanical Center has one in their green house. I didn't feel any ghosts when I looked up at it from below.

So it has to be a banana tree? Hmmmm Great stories... but I think I'll stay away from those kinda of trees... I'd rather just see the pictures. hahahaha Have a great day & thanks for sharing!

Thanks for sharing the banana tree stories. I had never heard them before. Spooky but cool

Hmmm. Interesting. LOL I wasn't expecting the ghost at the end

Here in Cornwall, people still tie bits of cloth on a few trees for healing--or just general well wishing. No ghosts involved, though.

I've never heard of this before... thanks for sharing!

I had no idea that bananas were so interesting! The flower/heart is so pretty #thatfridaylinky

We were not allowed to hang around the banana trees in our garden because it is almost impossible to remove the stains from their sap.

I'm lucky enough to have travelled and seen banana trees but never knew they held so many tales of folklore as well. Fascinating. #KCACOLS

Wow I had no idea that bananas had hearts/blossoms which are so pretty. I love the stories about the ghosts, they are fascinating; thank you so much for sharing this with us x

Gosh, what a real horror tale about your cousin!! And such a pretty, innocent looking plant! Great stories though, and as always, informative and interesting. #KCACOLS

What an interesting post. Never knew that this part of the plant was edible. #KCACOLS

My husband's uncle owns a banana plantation and they live in the plantation surrounded by banana plants. Not only did the family not experience any ghostly appearance, the family were able to send all their 3 girls to university.