I am back from my Chinese New Year break, pallies! Fatter and poorer though - fatter from all that feasting and poorer because of the Ang Pow distribution! My boys say they raked in more of the red packets this year than last year! And today is only the 7th day of the Chinese Lunar Year. The festivities last for 15 days!

For me, the best part of the Chinese New Year is the reunion dinner, which is kinda like the Thanksgiving Dinner in the west but instead of turkey, we have dishes that are symbolic and homophonous with auspiciousness.

We always start off with "Yee Sang" as the first course. The fun begins with the communal tossing of the ingredients into the air with chopsticks while wishes are expressed out loud to mark the start of a prosperous new year and it's customary that the higher you toss, the greater your fortunes! Invariably, the tossing ends in raucous laughter and food all over the table!

Getting ready with our chopsticks... 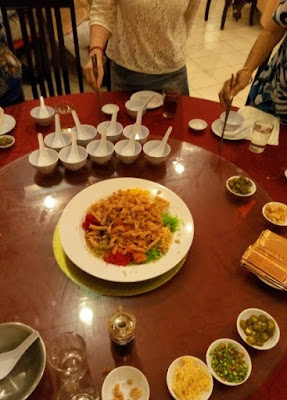 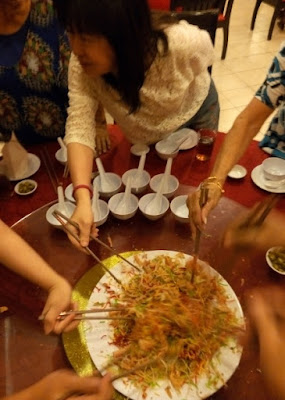 An example of an auspicious and symbolic Chinese New Year dish -  lychee for close family ties and duck for fertility. Several members of our clan have just gotten married! This should explain the increase in Ang Pows. According to Chinese tradition, Ang Pows are generally given by married couples to single people. 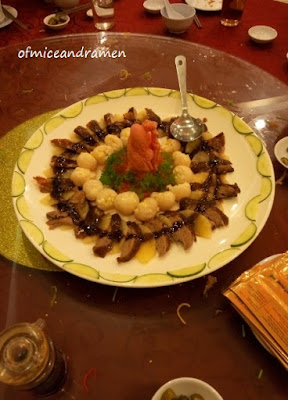 At the centre is a sugar sculpture of Shou, one of the three wise men, Fu, Lu and Shou, used in Chinese culture to denote the three attributes of the ultimate good life. Fu for prosperity, Lu for ambition/career and Shou for longevity. According to legend, Shou was carried in his mother's womb for ten years before he was born, and already an old man when delivered. He is recognized by his high, domed forehead and the peach which he carries as a symbol of immortality. He is usually depicted as smiling and friendly, and may sometimes be carrying a gourd filled with the elixir of life. 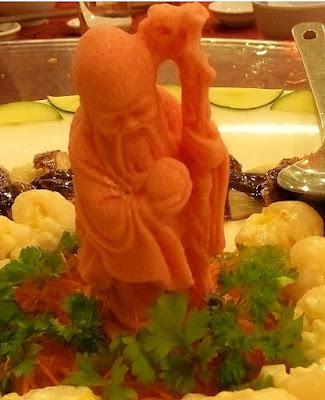 A video to explain how "Yu Sheng" (Yee Sang in Cantonese) is eaten. 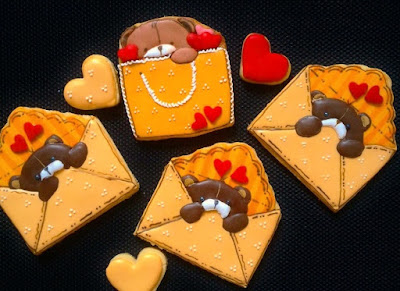