You say shrimp, I say prawn!

So who's correct? Besides knowing they are yummy edible 10-legged critters that end up in your curries and salad, do you know the difference between a prawn and a shrimp? C'mon, 'fess up!
Like most Malaysians, I had always thought that shrimps were small prawns until I shared a prawn curry recipe in a previous post and noticed the confusion when my American pallies referred to them as shrimps in their comments. I had specifically listed 'large prawns' as the main ingredient!  I googled for an explanation.Turned out I wasn't exactly wrong 'cos culinarily, many people distinguish between shrimps and prawns on the basis of size. Prawns are considered to be larger, while shrimps are smaller.  But then again, there are those who argue that prawns can be small and shrimps can be big. Confused? Hmm...maybe these decapods are just interchangeably used depending on which part of the world you live? Wrong again!  Believe it or not, there is in fact, a very BIG difference between the two!
So what makes a shrimp a prawn or vice versa? The difference is in their gill structure.
Prawns and shrimps are both decapods and crustaceans, and all that this means is they both have exoskeletons and ten legs. Once cooked and on a plate they are nearly impossible to discern because their main difference is the construction of their gills (or a part usually removed in the preparation and cooking process). They are classified in suborders based on gill structure. The prawn’s is branching (named dendrobranchia), but is lamellar (flat or plate like, pleocyemata) in shrimp. Also, prawns usually have claws on three pairs of their legs, while shrimp only have claws on two; and finally unlike almost all other decapods, prawns do not brood their eggs on the pleopods (legs along their tails) but release the eggs into the water after fertilization.

Australians, however, invariably use the word prawn rather than shrimp.
If you say "put another shrimp on the barbie," Aussies will just roll their eyes because they NEVER say that!  No Aussie except Paul Hogan has ever said it! It all  started back in the '80s by Paul Hogan as part of an American advertising campaign for Australian travel. Australians say "prawns." Apparently Hogan changed the phrase to "shrimp" because the commercial was commissioned for broadcast in the United States and the change was made to limit audience confusion. 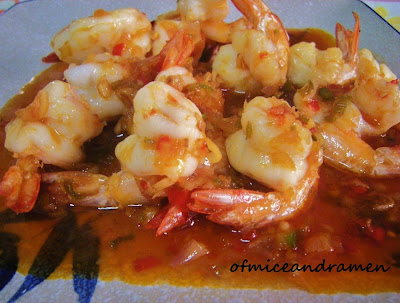 Love the subtle, lemony taste (from the lemongrass) of the sauce that's bursting with zing!

Method
1. Scald prawns in hot oil until the prawns turn opaque. Do not overcook. Remove the prawns and keep aside leaving about 1 tablespoon of oil in pan.
2. Saute chopped shallots and garlic until fragant. Add the chopped chilies and lemongrass and stir-fry for another minute.
3. Add water, ketchup, chilli sauce, fish sauce and sugar and bring to a boil.
4. Lower heat and let the sauce simmer for another minute.
5. Turn off heat and mix in the scalded prawns.
6. Serve with rice 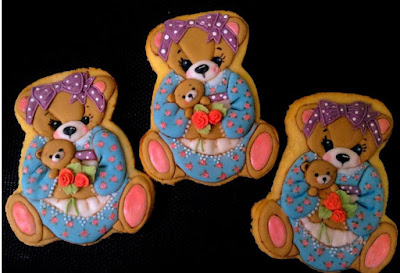