Hainanese Pork Chops And My Hometown 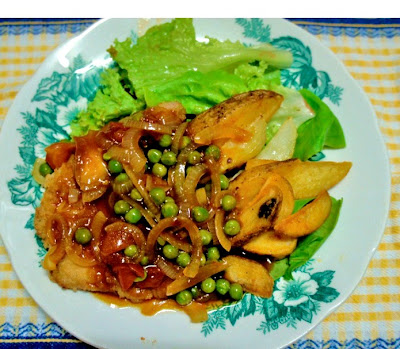 *Hainanese Pork Chops are so delightfully nostalgic - they always remind me of my hometown and Jin, my Hainanese classmate in Form 3 (9th Grade). Jin's parents used to own a coffee shop and they served the best pork chops in town!
I am not sure if it was my fascination for Jin's quaint old *shophouse or her mom's ethereal marble cake and melt-in-the-mouth pork bun  that drew me but I used to hang out at Jin's place a lot  wayyyyyyy back in those days.

*Shophouses are typically two storied buildings, with a shop on the ground floor for mercantile activity, a kitchen in the back and living quarters upstairs.
I can still recall the aroma of charcoal-toasted bread wafting into Jin's room from the kitchen downstairs while we chatted and listened to the melancholic voice of Karen Carpenter on the squeaky cassette player in Jin's room. Jin would play the songs over and over again.
Isn't it funny how you associate certain tastes and sounds to your childhood? Listening to Karen's voice still sends shivers down my spine!  Her voice was so hauntingly beautiful and effortless.

*Hainanese refers to the Chinese who originate from Hainan Island, the southernmost and smallest Chinese province. Towards the turn of the 20th century, many Hainanese migrated to various Southeast Asian countries, where they worked as cooks, restaurateurs, coffeeshop owners, sailors, and hoteliers.
In Malaysia (known as Malaya then), most Hainanese worked as cooks in British military camps and in the homes of British expatriates during the colonial days. Many of them transported their culinary prowess to their own coffee shops.
The Hainanese Pork Chop is a western origin using a combination of western and Chinese ingredients and is unique to Malaysia and Singapore.

Here's a recipe to share though it is no way as good as Jin's secret recipe. 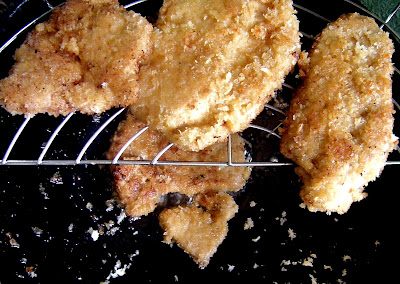 4. Fry the pork chops in the pan/wok until they are golden brown. Remove and keep aside. Leave a little oil in the pan/wok.
5. Saute the sliced onions just a little bit.
6. Add the tomato ketchup, dark soy, pepper, worcestershire sauce and chicken stock. Bring to a boil.
7. Add the tomato wedges and green peas.
8. In a small bowl make a paste with corn flour and a little water. Add to the sauce, let it bubble and thicken.