In Memory of Oreo

Our beloved guinea pig, Oreo, crossed the Rainbow Bridge 2 years ago but the pain was too raw and fresh then and I couldn't share about her passing. Now that the pain has dulled just a little, I want to blog about my little buddy. I want to remember every detail before my memory fails me.

She was 8 years old (144 human years) when she died. A couple of months prior to her death, we found an abscess on her body and took her to see Dr. J, a darling lady vet . Oreo adored her.

After cleaning the wound,  Dr. J sent us on our way. We were overjoyed that we weren't going home empty-handed.

Oreo's wound healed completely and for the next few months she was eating well and back to her old happy self.

Late one night, I noticed she was unusually quiet and listless. Her fur was all puffed up and her breathing seemed laboured.  I searched the guinea pig forums on the net and learned that a puffed up coat was usually symptomatic  of a cavy in pain.

It was close to midnight and everyone else was asleep. As I was about  to go to my son's room to awaken him so he could drive us to the vet, I heard Oreo suddenly dashing round and round her pigloo in a frenzy. My first thought was that she must be getting better or else she wouldn't be darting maniacally in circles like that.

When I went to check on her, she was lying very still on her side, gasping for air. I assumed that she was merely exhausted after all that crazy running.  I stroked her gently and thought that a session of cuddling and petting would probably fix her. Just as I was lifting her out of her cage, her head flopped to the side, her breathing stopped and her body went limp. I stared at her lifeless body in disbelief! Her death was too sudden. There wasn't even  time  to realize what was happening. A minute ago, she was so lively and now she was gone in the blink of an eye. I didn't even have the chance to cuddle her or say goodbye. I just couldn't bring myself to put her down in her cage and I held her in my arms and petted her until  her body grew cold.

Looking back, I believe there was a reason for her strange behavior before she collapsed. Despite her pain and difficulty breathing, she had managed to summon up whatever strength she had left in her frail body for that final surge of energy that enabled her to bolt like that. She was trying to get my attention so I would go to her. She had known that her time was up and she wanted to say goodbye to me before she crossed the Rainbow Bridge.

Goodbye, my little buddy. *Popcorn in that grand  meadow across the sky.  Know that you are forever loved and cherished.

Missing you, my little piggy. 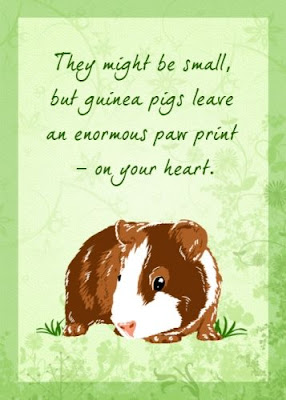