Hi pallies! I'm back. Hope y'all  had a great Christmas and a wonderful start to the new year.
We spent 2016 in Malacca (Melaka in Malay), a state located in the southern region of Peninsular Malaysia. It was a last minute decision as we all wanted a short weekend getaway before school reopens on January 4th. It had been quite a while since our last family vacation. Now that Josh is in college, his semester breaks and Rodney's school term breaks are no longer concurrent.

The story of Malacca a.k.a "The Historic City of Malaysia" begins with the legendary tale of a Sumatran prince named Parameswara who was out hunting one day and while resting under a tree, witnessed one of his dogs cornering a mousedeer. The mousedeer in its defence attacked the dog and even forced it into a river. So taken up by the courage of the wee creature, the prince decided on the spot to found a city on the ground he was sitting on. Hence, Malacca was born. Many claimed that the prince took this name from the 'Melaka' tree that was shading him. The year was 1400.

Parameswara established the Sultanate Of Malacca and the kingdom flourished under 8 sultans until it fell into the hands of the Portugese in 1511, followed by the Dutch in 1641, and then handed over to the British in 1795. Malacca went briefly under the rule of the Japanese in 1942-1945 during World War II.  In 1957,  Malaysia (known as Malaya then) gained its independence from the British. 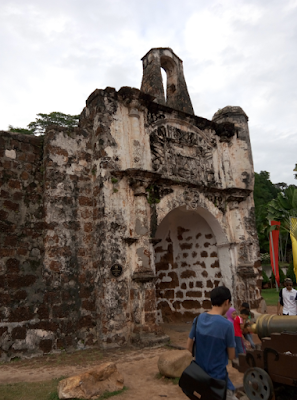 The ruins of the A Famosa Portuguese fort, an iconic landmark of Malacca 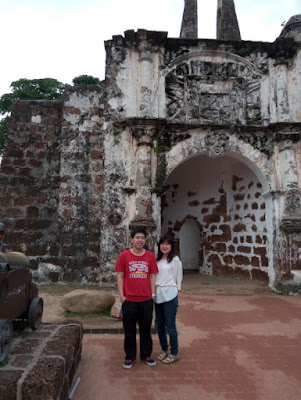 Me and Josh. Excuse the sloppy dressing! I had to untuck my shirt and unbutton my jeans after stuffing myself with Satay Celup! Burp!
Malacca's most unmistakable landmark. This red town hall dates back to 1650 and is believed to be the oldest Dutch building in the East. The building was erected after Malacca was captured by the Dutch in 1641, and is a reproduction of the former Stadhuis (town hall) of the Frisian town of Hoorn in the Netherlands. Today it serves as a museum complex.
Notice the missing right hand. In 1952, a statue of the Jesuit priest from Spain was erected in front of the ruins of St Paul's church in commemoration of the 400th anniversary of his sojourn in Malacca. A day after the statue was consecrated, a large casuarina tree fell on it, breaking off its right arm. Incidentally, the right forearm of St. Francis Xavier was detached in 1614 as a relic!

No trip to Malacca is complete if you haven't tried their Satay Celup. Celup in Malay translates as "dunk" so Satay Celup is basically skewered seafood. meat or vegetables that are dunked in a pot of boiling peanut sauce. Think Malaysian fondue! 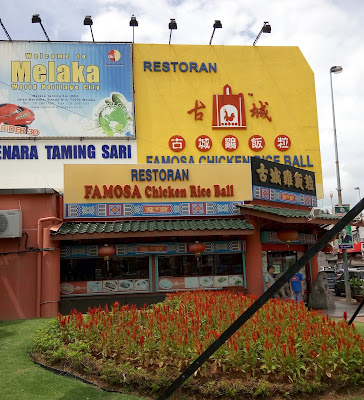 And you can't say you've been to Malacca if you missed out their chicken rice balls! 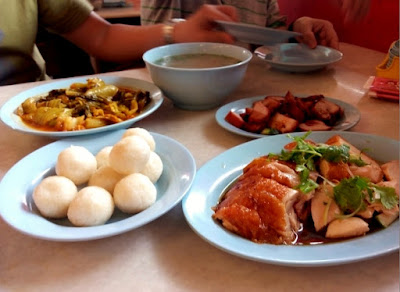 The rice balls are just rice shaped into ping-pong sized balls but they are more flavourful than ordinary rice and have a sticky texture, kinda like sushi.

We had a great time in Malacca but the boys and I would really have preferred a beach vacation.  Yep, I think I am going to add that to my 2016 list.