A funny thing happened when I was visiting an uncle in his kampong (Malay word for village). I was greeted by a goat just as I was stepping out of the car. It even nuzzled me! In all the years of my visits to this kampong, I had never seen any goats around.
All over the country, people are looking for goats to pet and touch as it is believed that touching a goat in this Year Of The Goat/Sheep/Ram is supposed to bring good luck. Goats are even brought into the malls for city dwellers to pet. 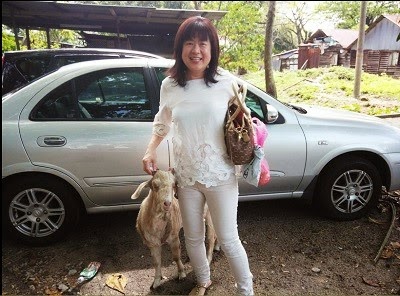 And a goat came to 'pet' me instead! How  lucky is that! I feel good!

By the way, today is the 15th and last day of the Chinese New Year. Bye Bye, Year Of The Horse! 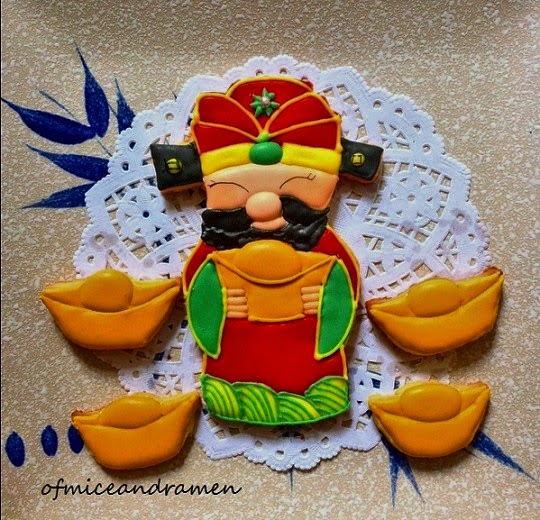 I made these Chinese God Of Wealth/Prosperity  cookies. Those boat-like thingys are 'yuanbao'. A yuanbao is a small metal ingot used in ancient China as money.

The God of Wealth is a Chinese deity who can bless one with luck, wealth and economic opportunities. Although worshipped throughout the year, he is especially popular during the Chinese New Year when the community welcomes a new year and mark the start of a new social calendar.

During this time, his image appears on posters, New Year cards, red packets, in the shape of a candies and as mascots. Nearing the new year, some organisations even invite an artiste dressed as the God of Wealth to send New Year greetings. Think Chinese Santa Claus!

Usually dressed in the style of a Chinese Mandarin official and in red, he holds symbols of wealth such as a gold ingot or the Ruyi, a sceptre stylised as a celestial fungus.

The most well-known God of Wealth is Zhao Gong Ming but the God of Wealth is also commonly regarded as the manifest of not one but several individuals commonly associated with the ability to bless people with wealth, luck and economic opportunities.