Growing up, we always had an angel as our christmas tree topper until it fell onto the floor and shattered. It was an old-fashioned blue porcelain angel that was handed down from my mom's aunt. I vaguely recall it looking somewhat like Pinocchio's Blue Fairy. Mom then replaced it with a tacky gold plastic star simply because it was easier to put up a star than an angel. Stars have somehow become our tradition. I've always thought an angel topper was more befitting as it symbolizes the true meaning of Christmas, a great reminder as to what Christmas is really about. In this respect the tree topper is more important than the gifts underneath. 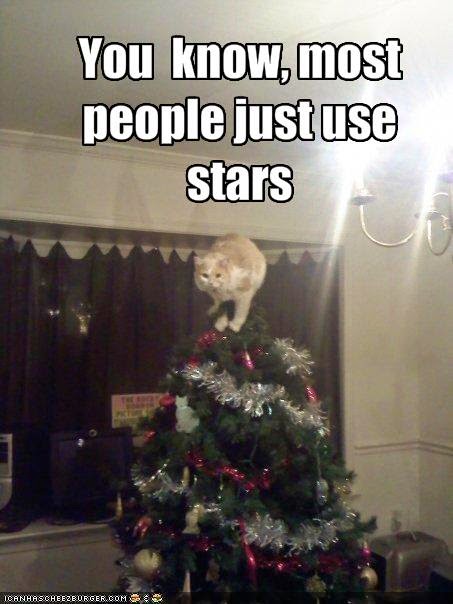 Ever noticed that you can hardly see a tree with an angel atop these days? The star seems to have outshone the angel. Kinda sad really, to see the tradition of putting the Arch Angel Gabriel on top of the christmas tree dying out.

Interestingly, I've just learnt that the angel has been a topper for Christmas trees since the early 18th century, in Germany, when trees were first brought into the home and decorated. The star is a much more recent addition, not being used until in the early 19th century.
The Christmas tree didn’t reach Britain until later in the 19th century and both stars and angels were used. The fairy has only crept to the top of the tree in the last 30 years.

The angel symbolises the first ever Christmas- in particular Gabriel, the archangel of revelation, who informed Mary that she would be the mother of Jesus Christ.

Also, an angel visited Joseph in a dream to tell him that he would serve as Jesus' father on Earth, and a number of angels appeared in the sky over Bethlehem to announce and celebrate Jesus' birth.

A tree was first decorated for Christmas in Latvia in 1510 which soon became a popular tradition.

Angels would be placed at the top of a Christmas tree to symbolise the significance of the angels who appeared high above Bethlehem to joyfully announce Jesus' birth on the first Christmas.

They are also used to scare away evil spirits from people's homes.

If not an angel, a star was used to represent the bright star that appeared in the sky to guide people to Jesus' birthplace.

Also, in King James's translation of the Bible it states: 'Lo, the star went before them, till it came and stood over where Baby Jesus was lying.'

Since then, stars have become somewhat a fashion statement to place at the top of a tree.

Speaking of angels, I made these

What kind of topper do you put on your Christmas tree? Angel, star or something else?