August is the month of the Hungry Ghost Festival, a time when the gates of hell are believed by the Taoist Chinese to be opened and spirits from the underworld are free to roam our world to seek food and avenge the living who had wronged them in their previous lives for closure. Although I am a non-believer, there have been many strange, paranormal occurrences reported from time to time during this month of the seventh moon - from mysterious inexplicable accidents, to items that go missing uncannily, to strange mysterious fires. Even animals appear spooked. Dogs are said to be restless and howling the entire month.
Growing up, I was witness to a bizarre phenomenon that happened annually in my hometown during the hungry ghost month. There was this street where thousands of swallows would perch nightly on the power lines above, their roisterous chirping and tweeting made quite a racket. But during this ungodly month, the street was weirdly quiet, with not a single bird in sight. Then, as soon as the month was over and the spirits believed to have returned to the nether world, the birds would reappear! This happened every single year during the month of the hungry ghosts until that part of the town was demolished for redevelopement. How do you explain that? 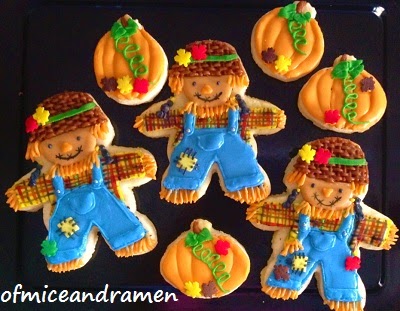 Ha! Who needs scarecrows when you have hungry ghosts!

I have a previous post with lots of pics to share about the festival  here.
Posted by Veronica Lee at 8:27:00 PM