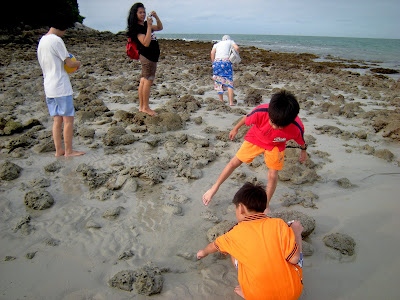 While beachcombing in Bintan, we were fascinated by the radial patterns made of wee balls of sand that littered the beach. On closer inspection, we found itty-bitty crabs hurling little sand balls onto the beach, creating a unique artwork that patterned around small holes. I thought those teensy-weensy critters were hermit crabs. Turned out I was wrong. They were actually sand bubbler crabs. 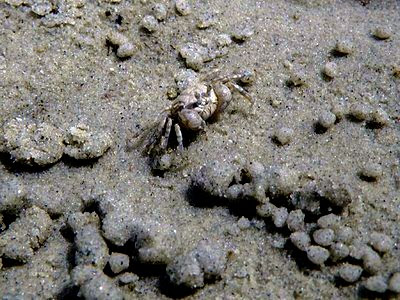 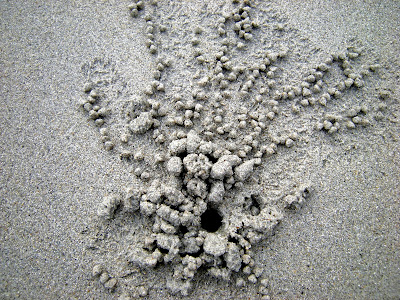 During low tide, the sand bubblers emerge from their burrows to feed. They ingest the sand, sieving out detritus (the food particles hidden within the sand) and regurgitate unwanted particles in the form of tiny perfectly shaped spheres of sand that are littered all over the beach.

With only a few hours available before the tide returns, the crabs need to work super fast. Each crab produces 12 balls every minute which adds up to 3000 balls per crab in a single day between the tides!!! 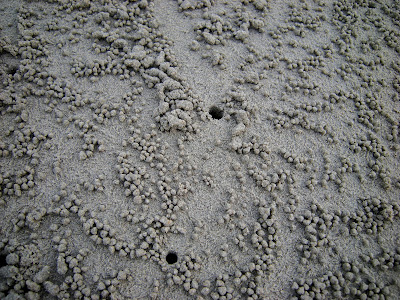 Losing one's way among the thousands of balls is easy so the bubbler crab leaves behind an escape route - a narrow passage free of balls that leads straight back to the safety of its burrow!!! 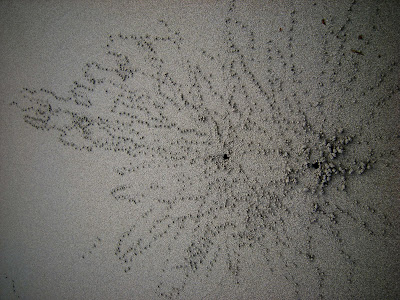 Watch a sand bubbler in action in this cute video!

"Everything that ever walked or crawled on the face of the earth, swum the depths of the ocean or soared through the skies left its imprint here."
Robert M. Fresco

* pictures taken at the Mayang Sari Beach, Bintan
Posted by Veronica Lee at 1:00:00 AM